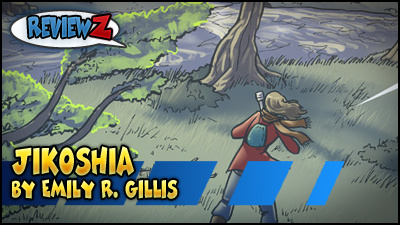 Ok! Now this is a better way to use URLs for a comic, while also branding oneself. “jikoshia.net” will take you to the comic which is actually at “jikoshia.waywardstudios.net”. So we not only see the intended comic with a URL name to match, but we are also exposed to the brand of Wayward Studios.

A unique name like this will still be difficult to drop in an elevator pitch, so I advise to keep business cards for the comic on hand.

Actually… I think this was a website I had looked at once for a Webcomic Website review. I’m not sure how much advice I needed to give, but I do kinda remember how it used to look. It still has a nice logo melded with a menu bar. It does have a Project Wonderful ad next to it. I would highly recommend they change the “your ad here” link to a more site appropriate color, though.

The website now has a large, central background image that fades out on the sides. So it has this nice outdoors scene that works with the logo, without being too distracting. Pluse it helps take care of dead space, and frames the comic and website well.

The menu has links for “about” the comic, includes a cast list. I always enjoy cast lists. There is also a link for “fandom”, colledction of fan art. I always appreciate fan art, and I do like the dedicated area for it. On the archive, being that this is a story comic, each chapter is broken down into page links. I do find this sort of breakdown far more helpful for readers, than a big long list of hyperlinks. Simple, but effective.

The main comic has a right sidebar which is a little messy for my tastes (entities with varying width); but the comic is nice and big, and ready to read. I would also prefer the navigation buttons to be a little more designed like the menu bar is, buy its still functional.

Below the comic is the blog, along with cycling comic ads for a couple of comics communities. These actually look fairly nice together. A very simple set up. All along with a nice clean footer.

Ok, let us move on to the comic itself.

The first chapter almost makes me go “here we go…” with the school girls in uniforms, like any manga-style comic by non-eastern artists; but the art isn’t trying to be that sorta design. At least not with the characters. The character design looks more “owned” by the artist, rather than derivative like wannabe manga-style, non-eastern, pacific artist tries way too often…

Ok… maybe more on that another time… But I’m saying that things look promising for Jikoshia’s art style.

While early on the comic is fairly reminicient in several aspects to grayscale manga-style comics, it doesn’t take a whole chapter before the art really becomes its own.

There is a fair amount of background detail and design, particularly once the comic goes into color. This was clearly intentional for the story. Which is good for the review, because the art shines a whole lot more with the color design, especially with the use of digital “paiting”, gradients, and finder details.

It’s not perfect. There seems to be a fight between the harder black lines, and the detail of color. Like it’s fighting a simpler cartoon design, but the art only gets better in the overall feel and look as the comic continues.

Ok, now what about the story?

Well, it is a little dry in the beginning. Again, this is a story comic, and setting up the characters. This is just something people need to accept. Story comics require an investment. This is why a story comic should never be online (or at least not start advertising) until a decent amount of content is available for a new reader to power through to formulate an opinion.

Still, several pages into the first chapter, the story turns into one of those “main character finds themselves out of place”, and…. actually, it is fairly reminicient of The Wizard of Oz and maybe Alice in Wonderland.

I actually write these reviews as I am reading them. So I can incorporate genuine reactions as I come upon them.

So if you hate those kinds of stories, you might not like this comic. That’s fine. Go read something else. Hmmm… Actually, the story feels heavily inspired by a variety of stories. Western and Eastern… at least of what *I* know.

Perhaps I’ve not been exposed to enough stuff, but while the comic feels heavily inspired, it does not feel derivitive.

So far, through about five chapters, this is a pretty fun “fantasy meets normal-earth” type of story. A little bit of everything mixed together. I’ll be keeping this in my bookmarks.