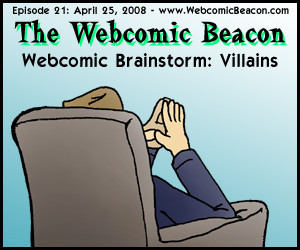 The Usual Suspects are once again joined by Eric, Thom, and Gothia. It’s another webcomic brainstorm session! This week we punch out some details on our story villains! It’s a good discussion again this week! Mark Savary reviews True Loves 2; and Peter Tarkulich gives his impression of Everything Goes. We also clean up our promo segment of Strip Fight! 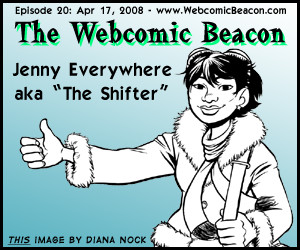 Fes and Aaron along with Jenny Everywhere comic creators Steve Wintle, Nelson Evergreen, Scott D. M. Simmons, and Benj Christensen. We discuss Jenny Everywhere: the Open source, Public Domain webcomic sensation. The origin, the character, the comics, and the idea. Take a listen to the show and see how you can join the party! Mark Savary brings us a review of Sarah Zero; and Peter Tarkulich gives his impression of The Sealed Gate.

Thanks to Diana Nock for this week’s cover! Her own rendition of Jenny Everywhere!

Current Jenny Everywhere projects: The Jenny Everywhere Chronicles and The Crossing Over Worlds. Also, it must be known that Nelson Evergreen’s “Jenny Nowhere” idea is released as open source. So have fun and see what you can do! 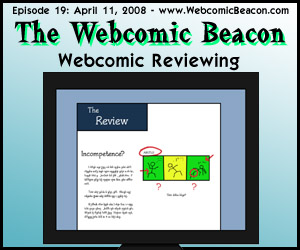 Fes, Tanya, and Brett Hainly discuss why we used to review webcomics and why it has worn us numb. Why? Hint: We blame people that never learn. The show runs very long today. Perhaps its because we found so much that pisses us off. Aaron of The Best of What’s Left, a long time contributor to the show has officially become another co-host for the show!

On top of that, we decided to go with Mark Savory, of Autumn Lake, to be our new Webcomic Reviewer! Officially! That’s right, he can do the webcomic reviews, instead!  This week he reviews a comic that follows the story of Dracula by Bram Stoker, though it’s done in a furry style! Check out Dracula!

Other Webcomic Reviewers: Tangents and Websnark. If you know others, Let me know and I’ll add them to our main Reviewer’s list. 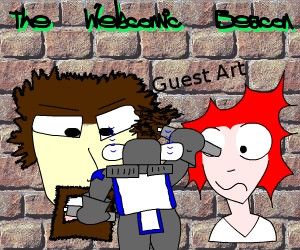 Fes, Tanya, and Aaron are in the studio, talking about Guest Comics, Fan Art, and the etiquette that should be practiced around them. We are down all of the rest of our regular contributers this week, we hope to correct that soon! Some changes are slated for the near future, out of necessity.