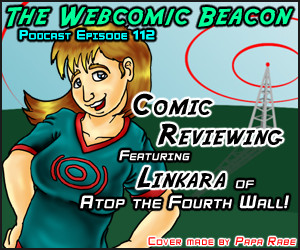 Lewis Lovhaug (aka “Linkara” from Atop The Fourth Wall) joins Fes, Tanya, and Mark to discuss comic reviewing! We talk a bit about why Linkara doesn’t review webcomics and how he started Atop The Fourth Wall. From there the show turns into trade comic and superhero discussions! 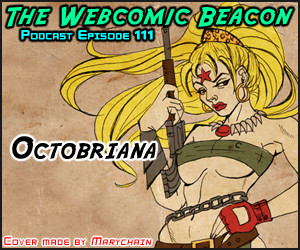 Steve Orlando (Octobriana Kickstarter) and Peileppe (Octobriana Fan Blog) joins Fes and Mark to discuss Octobriana! Her original creation and origin has much debate. However, Octobriana herself was essentially designed as an uncopyrighted comic heroine, of sexual expression and underground rebellion, from behind the Iron Curtain.

* Peileppe said he forgot to talk about the Czech artists : Bohumil Konecny, Zdenek Burian – that were the true artists behind the book “Octobriana and the Russian underground” back in the 70s). Also that he should have mentioned Karel Jerie (www.kareljerie.cz) who has drawn a remake of Octobriana.

Cover Art by: Marychain (Deviant Art Page). Milestones: Nothing Happened Today (1 yr), Pure and Hidden Truth (100), and The World According to Geek (100),

Thanks to Witchiebunny, our announcer! Show notes: Jenny Everywhere episode, Octobriana Wikipedia Entry, Octobriana and the Russian Underground, Posuer Ink, Penguicon, Linkara and Atop the Fourth Wall, The World According to Geek, Shaun Bryan 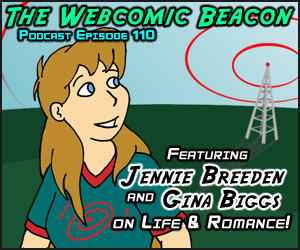 Jennie Breeden (The Devil’s Panties) and Gina Biggs (Red String) join Fes, Tanya, and Mark to discuss their webcomics, experiences, and romance. I very fun episode to listen in on with plenty of laughs!

Thanks to Witchiebunny, our announcer! Show notes: Future potential topics for the Webcomic Beacon,