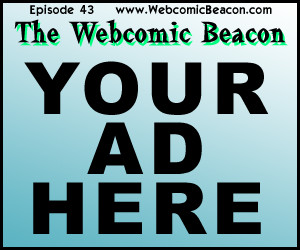 Tony Piro of Calamities of Nature joins Fes, Tanya, and Aaron are talking about advertising! No, not placing ads, but placing AD SPACE. We go over Tony’s reviews of various ad services such as Project Wonderful. Also, we joined stupid Twitter… or yeah… twitter.com/webcomicbeacon

Phil Foglio of Girl Genius introduces our show this week!

Milestones this week: … NONE REPORTED! For the Beacon Searchlight we give our first impressions of Gilbert and the Grim Rabbit! Do you have a milestone to report? Send a notice to us at WebcomicBeacon@gmail.com. 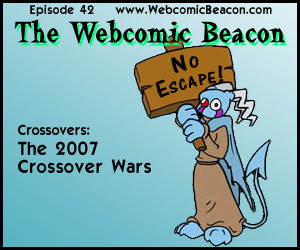 Fes and Aaron are talking about Crossovers and The 2007 Crossover Wars! Hogan of The Cameo & Crossover Archive, Reinder of Rogues of Clwyd-Rhan, and Gothia of America Gothic Daily all join us today. Mike of Prepare to Die comes on later to talk about the WAGON Webcomic Battle card game!

Mark Savary talks about Pirates, as September 19 is Talk Like a Pirate Day! He looks at The Wannabe Pirates, Pirates vs. Ninjas, and Sails Of Blood!

Milestones this week: Ripeville (200), Insert Comic Here (2 Years), Girly (600), Commissioned (4 Years), Anders Loves Maria (200 + 2 years)! For the Beacon Searchlight we give our first impressions on Jovian Luck (mistakenly referred to as “Space Heist” on the show). Do you have a milestone to report? Would you like us to give our (positive and/or negative) impressions on your comic? Send a notice to us at WebcomicBeacon@gmail.com. 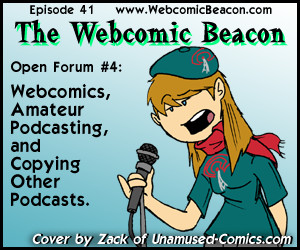 Mark Savary joins Fes, Tanya, and Aaron as we just sit back a bit and shoot the breeze about webcomics in an open forum. We also rag on The Gigcast a bit, but only because we love them! And we are not at all copying them in any way…. no, we’d never do that. Zack of Unamused Comics brings us this week’s cover!

Steve Notley of Bob the Angry Flower introduces our show this week!

Milestones this week: Cigarro & Cerveja (10 years and ending) and The Far Reaches (200). On the Beacon Searchlight we look at, and give our impressions on Geist Panik. Do you have a milestone to report? Would you like us to give our (positive or negative) impressions on your comic? Send a notice to us at WebcomicBeacon@gmail.com. 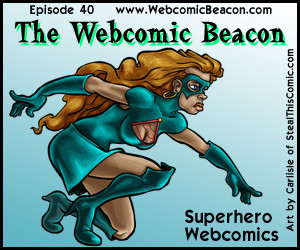 Ben Carver of Point Guardian, Al Schroeder of Mind Mistress, Neil Purcell of Dasien, and Abby Lark of The Green Avenger joins Fes, Aaron, and Tanya as we once again discuss superhero webcomics! Thanks to Carlisle of Steal This Comic for doing our cover! Neil also drew something for this show before he knew Abby was coming and that the cover was already being drawn (click either image for larger size):

Kent of White Ninja Comics introduces our show this week!

Milestones this week: The Gigcast, another webcomic podcast (3 years), Legostar Galactica (6 years), Sara Zero (300) , Circle vs Square (100), and Galaxion (2 years). On the Beacon Searchlight we look at Mind’s Eye of Jupiter.