Thanks to everyone that submitted to the contest, and congratulations to our winners! Additional postings will be post on The Shifter Archive website in a day or two. Winners, if you see this post before you get an e-mail, you will also be mentioned on the Webcomic Beacon when we record later today.

The “Draw to Win” contest was a join venture between The Webcomic Beacon podcast and the WAGON Webcomic Battle Trading Card Game. It ran during the Summer of 2008.

Actually, it was the top 3 winners (by website voting), whose standings determined the cards. There were a total of 9 entrants.

The 3rd and 2nd place got to have an official card in opposing decks that were to be released (the “Alpha” and “Beta” decks). Both had very similar card stats, with slight opposing differences.

The 1st place winner got to be the first “starred” special card. It is an incredibly powerful card that was only available from special promotions; mainly from meeting The Webcomic Beacon or WAGON at conventions. 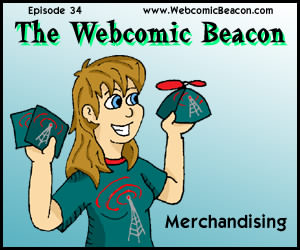 Fes, Tanya, and Aaron are joined by Tanya Higgins and Scary Voice Mr. Christopher Solace of A Better Way Merchandising Service (Launching Aug 12th). They also demonstrate how we use the show for shameless self promotion. But we do talk a good deal about merchandising for a webcomic and we glaze over putting up a store.

Also, don’t forget to vote for the Jenny Everywhere “Draw” to Win contest! Right here on The Webcomic Beacon, brought to you by The Shifter Archive and WAGON Webcomic Battle! Voting Ends Saturday night! 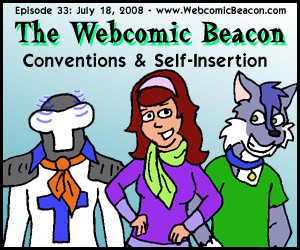 Fes and Tanya start talking about some conventions for a little bit, but not before talking about ADHD, Scooby Doo, and  riding bikes… Um… what else? Oh yea, then we eventually moved on to self insertion.

This week we set our Beacon Searchlight on Steal This Comic! 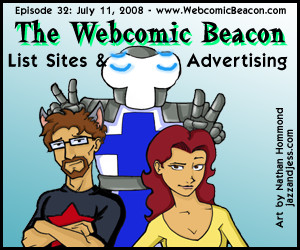 Fes and Tanya talk about those webcomic list sites, such as The Webcomic List, where you can submit your webcomic to an ever expanding index. We also talk about advertising your webcomic through services such as Project Wonderful. Also, this week’s cover is from Nathan Hommond of Jazz and Jess.com. Another great way to advertise, by sending in Fanart!

Mark Savary reviews Set Apart this week, and we set our Beacon Searchlight on The World Explodes!

Milestones reported this week: A Pessimistic Sense of Inadequacy (P.S.I.) hits 200 Strips and 2 Years! (Missed a few I should have mentioned, we’ll get them next!)

Don’t forget the “Draw” to Win Contest! in conjunction with The Shifter Archive! Ends July 21st! 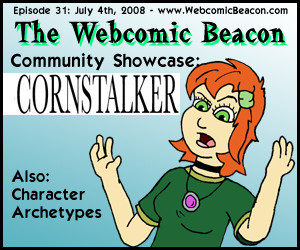 Dawg and Komiyan of the Cornstalkers joins Fes and Aaron for another Community Showcase! Afterwards we discuss Character Archetypes in webcomics! No review this week, but we set our Beacon Searchlight on Insert Comic Here!

Also don’t forget the “Draw” to Win Contest! in conjunction with The Shifter Archive!