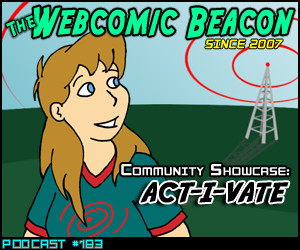 Fes and Tanya are here to talk about the collective, ACT-I-VATE! 5 years in the making with dozens of contributors. On the show with us we have Troy Wilson of  PANELS FOR PRIMATES, Chris Miskiewicz of EVERYWHERE, Seth Kushner of CulturePOP, Dov Torbin of THE REVOLUTION WILL BE TELEVISED, and James Smith of GANG OF FOOLS.

The break song was We Are The Vikings by Koni LaCroiz | Notes: Wyliman, The HOPE: Hero Initiative charity anthology (Diamond Order Code DEC101038.), The Primate Rescue Center, Talking with Tim (Panels for Primates), 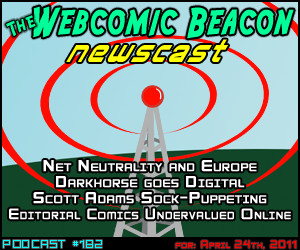 Onezumi and Harknell (Intervention Con) rejoins Rosscott and Eric Kimble for this edition of the Webcomic Beacon Newscast!

Why Editorial Cartoons are Undervalued on the Web
(Source: Cagle Post – via The Daily Cartoonist)

How to use your College Library as Zombie Webcomic
(via: Bleeding Cool – Original PDF)

Lecture by Paul Levitz at Google
DC’s online strategy is to wait for a kid to come up with a good idea and then steal it from him?
(Source: Bleeding Cool) 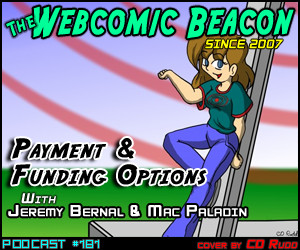 Jeremy Bernal (NSFW: SexyFur and Tail Heat) and Mac Paladin (Starship Moonhawk) join Fes Works, Tanya Higgins, and Eric Kimble to discuss Payment and Funding Options. Carrying over a discussion from the last Newscast (episode 180), we continue the coverage that VISA is discriminating against certain kinds of websites…. but only in the United States and Canada. All the while MasterCard doesn’t. Don’t worry, we also go into additional ways to accept payments online. 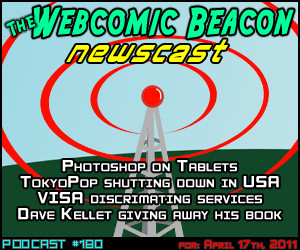 H. Caldwell Tanner (LOLDWELL) joins Rosscott, Alex Heberling, and Eric Kimble for this edition of the Webcomic Beacon Newscast! There is much to discuss and cover, including, Photoshop Touch, TokyoPop closing down its America offices, Dave Kellet giving away his book, and more!

We also have an original story setup and researched by our own Eric Kimble. Apparently VISA, the credit card giant, is discriminating against certain adult websites. Essentially, their definition of “adult” includes simple nudity. Additionally, they have been purging websites that don’t contain beings that aren’t 100% human. This includes furries, elves, mermaids, and catgirls.

Read more on the all of the stories mentioned on this show, and their links,
after the jump:

Photoshop for Tablets Released
(Source: GiGaOM)
From the article “Photoshop Touch will first be implemented in three official Adobe apps scheduled for May release, called Eazel, Color Lava and Nav. Each app essentially transforms your iPad into an additional control device or surface for your desktop-based installation of Adobe Photoshop.”

Proposed Hulu-Like Service for E-books
(Source: GiGaOM)
From article “What does Hulu for e-books mean? Book publishers themselves should get together like NBCU, Fox and Disney did and begin to offer their content — or at least some of their content — in both ad-supported and subscription offerings.

OK, you ask, why should they do that and not just let, say, Google or Amazon do it instead? Unless I’m wrong, publishers are the only ones with big enough rights libraries of both new and catalog titles to package up in a variety of ways to make this idea interesting. And in an agency-model world, booksellers like Amazon can’t adjust pricing as they see fit, only the publisher can (which is why I have my doubts about startups like 24Symbols).”

Webcomic Beacon Original –
Visa Purging “Furry” Sites From Their Client Base.
(by Eric Kimble)
This is a story that I have been working on myself. The Webcomic beacon is in a sense the one breaking this story.  The short of this story is over the last year Visa has been rejecting any site that is both adult (featuring nudity) and has non-human character (mermaids, catgirls, werewolfs etc).  This rule has been specifically enforce for any site that has Furries in adult situation.

The Fact that I have been able to ascertain are as follows:
Something happened in 2003.  In 2003 Paypal changed it user agreement to ban adult content.  And at almost the same time Visa began and anti pornography program along with the other credit card companies.  Something put the fear of god into these companies.

Upon further investigation it seem the thing that scared the credit card industry was the the Child Protection Act 2257.  In name it was an act to prevent child pornography but the Bush administration pursued it with fervor dedicating a good deal of money to prosecuting business that did not keep the correct records.

Visa campaign was the most extensive.  Nominally a campaign to stop child pornography Visa began reviewing every adult site that used their card and imposed a $750 setup $500 fee to charge regardless of the nature of the adult site’s content for these reviews.  Violator according to Visa standards were drop from the system with out appeal and a percentage of violators were reported to the government for prosecution. Visa campaign went far beyond what the other payment system were doing.

In 2010 Visa began using their review process to drop any site that were classified at adult and had images of non-human character.  This fact has been confirm by a number of site owner and worker at an adult payment gateway system that uses Visa.

The visa restriction include restrictions on mystical creatures such as mermaid.  (Source: Eric Kimble)

Visa review process both the fee and the review of site for content only apply to the United State and Canada.  It is not applied in the European Union and a number of site have Incorporated in the EU to avoid the restriction.

Hetalia: Axis Powers
Japanese Webcomic goes to print and then to animated series.  All about “Boy Love” with the boys representations of countries during WWII.  Went from Webcomic to fully funded animated series in 2 years. Though this may not really news to fans.
(Sources: Toon Zone – Wikipedia – Hetalia Indexes – FUNimation Official Site)

Dave Kellet Gives Away His Book for the Chance to Win an Eisner
(Source: Sheldon – The Comics Reporter)

Axe Cop Cameo In Powergirl Comic?
I don’t know what the heck is going on here but there is a dinosaur on the cover of powergirl that looks awfully familiar.
(Source: DC Comics Website vs Topatoco store entry)

Academic Survey Being Conducted about Webcomic Habits.
(via ComixTalk)

Infinite Canvas Explored
Choose your own path comic posted by Shira-chan.  An interesting way to make comics. This is not an original idea, as it has been explored like this before, but is another example of it.
(Source: Shira-Chan – via Scott McCloud) 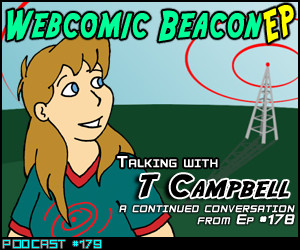 T Campbell (Penny and Aggie, Fans!, Guilded Age) stays on after Episode 178 (aka Newscast #16), with Rosscott, Eric Kimble, and Fes Works to continue a conversation on the webcomics “model”. Just a short episode, but longer than a normal EP; but a really good listen with good perspectives on the industry of webcomics. 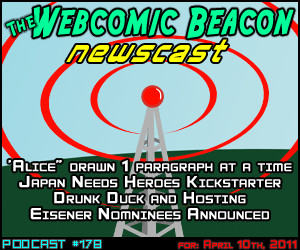 T Campbell (Penny and Aggie, Fans!, Guilded Age) rejoins Rosscott, as well as Fes Works, for this edition of the Webcomic Beacon Newscast! Again, Eric Kimble is our main newshound for most of the stories we cover.

Joy of Tech picked up by Business Week
(Source: The Daily Cartoonist)

Alice in Wonderland, Drawn One Paragraph at a Time.
(Source: on Facebook – via MTV Geek)

Did Doctor Horrible make a difference on the web?
(Source: GigaOm – via Bleeding Cool)

Drunk Duck Quackcast 21.5, revealing their position and what’s been going on.
(Source: itself)

DJ Coffman Post step by step guide of hosting your own comic
(Source: himself – via Fleen)

Rob Granito offers interviews, if you pay
After getting lambasted for stealing other people work and misrepresenting his experience.  Rob Granito has sent out an email saying he was the Charlie Sheen of comics and offering to do interviews for a price.
(Source: Bleeding Cool) 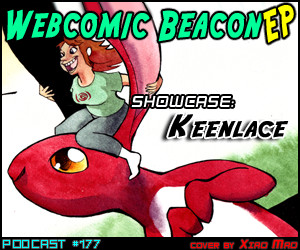 Vinnie D. (Antibunny) joins Fes in a pre-recorded Webcomic Beacon EP to talk about Keenlace! Only about 20 minutes for this show. It’s good to see Keenlace up and running again, as it’s been around for 10 years now. 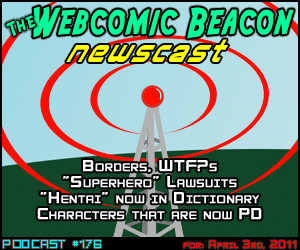 Phil Kahn and T Campbell (Guilded Age) joins Rosscott for this edition of the Webcomic Beacon Newscast! Again, Eric Kimble is our main newshound for most of the stories we cover.

Also, as The Webcast Beacon Network is gearing up for a new webfiction podcast. In that we are looking into doing webfiction readings and/or audio performances. Auditions are open for people to get involved, so we can make potential selections for regular or semi-regular voice work. The the piece people are welcome to either do a reading or performance, is Bunny Tacos. Feel free to do a section, or the whole sequence. Send submissions to WebcomicBeacon@gmail.com with “Bunny Tacos” in the subject. 128 kbps MP3 files should be good enough for right now, but save your higher quality recording, just in case.

The Marvel/DC copyright on “Superhero” is being challenged.
(Source: Bleeding Cool)

List of Characters that have entered the public domain
The first appearances of many well known superheros are now in the public domain and could be used by creators to make their own stories.  This site has a complete list.
(Sources: Bleeding Cool – Pop Crunch)

Plus One – 9 Months and Counting

Jazz and Jess – Malice and Hypocrisy