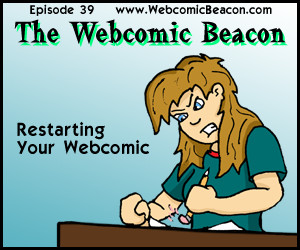 Tara Tallan of Galaxion joins Fes, Aaron, and Tanya as we go over reasons and “how-to”s of restarting your comic. We also get Jason Wilson of Smuggling Vacation on to discuss some “controversy” that came from his print comic.

David Willis of Shortpacked introduces our show this week!

Milestones this week: Jazz and Jess (3-yrs) and Code Name Hunter (7-yrs). The Beacon Searchlight points at Unions of Heros and we give it our impressions. Mark Savary comes back with a review of Last Place Comics.

Sites mentioned: Midwest Fur Fest, Fan Expo, Geek Kon, Girl-a-Matic, ReBoot, Dark Red, and be sure to check out our Talk Shoe page for “Extra Content” from after the show ends. 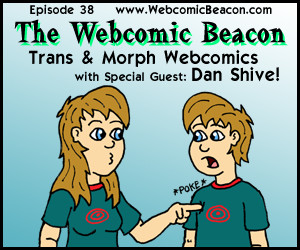 Not Randy Milholland of Something Positive introduces our show this week!

Milestones this week: Dungeon Warden (500 and Ending), and Exiern (3 years). 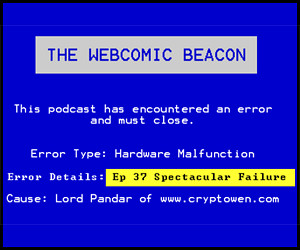 Fes and Tanya, are joined by Ben Carver to help salvage what Murphy’s Law had done to this week’s show! Awesome! Let’s say it’s everyone’s fault… yea… let’s go with that. Well, Hopefully this is entertaining since Fes get’s made fun of for not knowing how to do things. It’s an Open Forum Discussion during another Spectacular Failure! We also talk about a few things brought up in The Webcomic List forums. Some of which turned into a discussion on Feminism. And then we roll into how Fes can’t do things again.

J. Jacques of Questionable Content introduces our show this week! Special break music was from Lord Pandar’s coming music album, with samples at Cryptowen.com, whom of which also did this week’s cover! 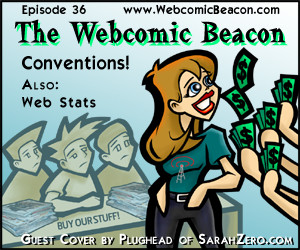 Welcome to our new home on The Rampage Network, our new host! We thank our old host, Xepher.net, for hosting us up until now!

Fes, Tanya, and Aaron bring up the topic of CONVENTIONS on The Webcomic Beacon once again! This time we talk about Tanya’s experience at ComicCon! Later on in the show we talk about tracking web stats for your website! This week’s cover is done by Plughead of Sarah Zero! Thanks! Also, thanks to Jennie Breeden for introducing the show!

Mary Savary brings us a Webcomic Review of Transmissions! Milestones reported: School Spirit (600), 8:1 (5 years), The KAMics – Gertrude & Bruinhilda (100). Also we have a Beacon Searchlight of Circle vs Square this week!

Also, check out these other webcomic podcasts: The Gigcast and Podwarp 1999! 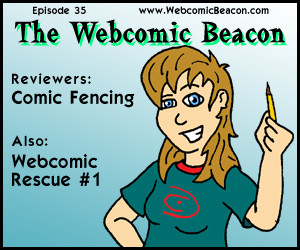 Fes and Aaron are joined by Delos of Comic Fencing! A multi-reviewer, comic review site. Briefly we are joined by John of The Rampage Network. Speaking of which, The Webcomic Beacon will be moving there next week. We’ll keep you posted!

This week we also have our first Webcomic Rescue segment covering Minos the Minotaur! Plus we touch base with Tanya while she’s at San Diego Comic Con! Also we have a Beacon Searchlight of Random Acts Comic this week!

Congrats to the winners of the Jenny Everywhere “Draw” to Win WAGON Webcomic Battle Trading Card Contest! 1st place to Benj Christensen, 2nd to Jakob Burrows, and 3rd to Zach Holmes! See all of the entrants here on The Shifter Archive!