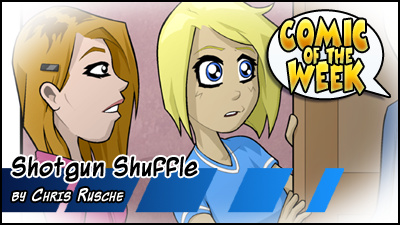 The writing is… well reading the comic feels a little hurried compared to some other comics I’ve been reading lately where things are a bit more stretched out. So you could say this comic does not linger too much. For a webcomic updating a couple times a week, it’s refreshing to read a story that progresses at a fair clip.

The art is interesting with it’s use of black lines and coloring, which is really what draw me into the comic. Though the full-body character proportions are… a bit off… to the point of me not being able to tell if it’s purposeful style or not. Still, the expressive characters are really keeping me in on this one. That and seeing the dynamics play out between the two main characters.

As a fan of the series, I hope folks get more into it. It’s pretty good, and like it says here, it proceeds at a brisk pace. The characters are drawn intentionally so, sometimes for quick gags, and other times for pointed references to people’s self images and self-esteem issues.

At any rate, the author of the comic regularly responds to his readers’ questions and comments. It’s a great comic, and worthy of plenty of readers. Hope you all enjoy it!