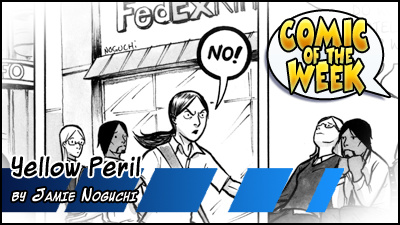 This is a comic I should have picked up MUCH earlier than I had. It’s a black and white comic, with what I think may be ink wash and pencils for contrast. B&W comics are always a bit difficult for me to visually get into, but the art is frequently expressive and the contrasting works very well. I have not read the whole archive, but I’ve been enjoying and reading it ever since I started.

The comic itself, at least in the more recent years, is focused on three web and digital designers/artists: Kane, Bodie, and Ally. They have been under “the man” in their corporate job, and… this could be SPOILERS if you want to start from the beginning, but they finally are branching out on their own business venture together. Much of the comic focuses on character dynamics and interactions. Good mix of drama and comedy, though I’m not one for drama as much, so those parts can wear on me a bit. But really, hardly any complaints from me with this comic.

The characters are are well defined, even with me not knowing much of the comic’s archive. They were a great sticking point for me in continuing to read this comic.