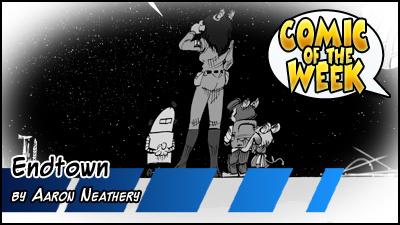 Something that a Webcomic Beacon guest continued to highly praise, so I had to check it out. This is another comic set in a post-apocalyptic setting. The landscape of the earth and it’s plant an animal population has been drastically changed… literally. The earth is a dustball, with pockets of structural debris on the surface, and handfuls of survivors underground.

Some of the weaponry that caused the end of the world, includes a virus that either transforms humans into anthropomorphic animal beings… or horrible, horrible monsters. A huge play on this set piece is that the remaining humans want to eradicate the mutated “humans”, because… humans always have to be at war and destroy what is different from them.

Surviving is the key. Demonstrating also that people have lost their “human-ness”, that they have not lost their humanity… or at least it’s still a struggle. But we are given an array of storlines that follow different characters. I will say there is one storyline I felt was… way too Duex Ex Machina (you’ll know it when you read it), but overall I very much have been enjoying this comic for years now.