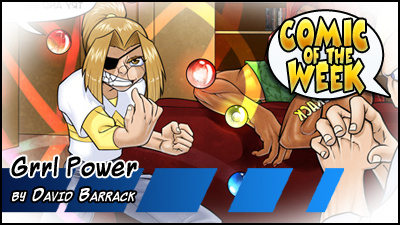 Ah yes. Well toned and endowed super-heroines. This comic makes no excuse for the visual display of busty and muscled super women (well, there’s muscular, tight-shirted men in here too). Though the real star of the show is the “less than conventional” girl, Sydney. She’s a tomboy, nerd, kinda-petite, goofball. And I love her! Almost like she’s the antithesis of many of the other female protagonists that appear.

Anyway, this comic is all about Sydney being found out by a government super-hero branch. Turns out she has some sort of powers too. And… Well.. actually this is where its hard to really describe this comic. It is really a slow-paced, graphic novel. When you look at how long this comic has been online (and with one page a week updates), it feels like it should be much farther along in a story. This comic tells EVERYTHING that has happened since the morning… Almost 150 updates, and the comic’s first day isn’t even over yet!

Still, there is a LOT of dialog, context, set pieces, and story fodder in what is online thus far. It probably reads really well with an archive dive, but will get a bit slow once you catch up. For a “superhero” comic, there’s not a whole lot of action so far. But exposition and character development isn’t bad, either.