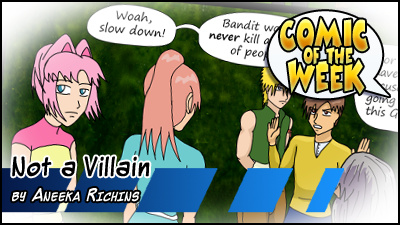 Not A Villain
by Aneeka Richins

This is one I had found, but didn’t really like at first. But it had several elements that kept me reading. The art itself is very simplified and pixelly, but from the context of the comic, it’s because it’s in a digital world. I could nit-pick several things more about the art style quality, but there is a sense of practiced structure to the character designs. Even if they proportionally off in one way or another. Still it was something that was still visually pondering to me that I kept reading.

The story is set in a post-apocalyptic time… though we effectively see none of this, because the world’s survivors primarily gather online to… basically live life. We do get hints here and there about what people do offline, and how they survive, and a vague explanation of what cause the collapse of the world (it’s “hackers”). Though we mainly focus on the main character, Kleya, as we find out she’s a hacker in hiding. Again, vague back-story, and she’s trying to do good on her second chance.