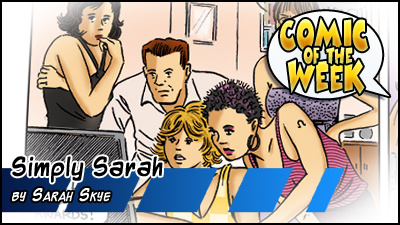 Something I randomly came across. This comic is centered around Sarah and her girlfriend Janey at the time I started reading the comic. Things were also getting a fair drama potent and too spoilery to mention here. Now I’m not typically one for slice of life style comics, or anything that deals with relationships or drama, but the art helped pulled me in for a closer look. I ended up reading back to a truth or dare party, where things became a bit more drama filled once it was revealed that one of the characters, Nikki, had been putting a comic online based off of her friends! Without all of them them knowing about it (let alone being online)!

I like a lot of things about the art. Good line work and facial expression; good sense of proportion. Coloring could use a bit of work though. I’m still reading through the archives, but it has found its way into my webcomic bookmarks.

At the time of this post, the comic has “more or less” ended; but is open enough for the author to come back to it in the future, if she can.

Comic Website | WebcomicZ Entry
NSFW*: Occasional Nudity and Some Sexual Acts, but not the majority of the comic.

Sorry to say that the WCBN is NOT open to submissions for reviews or for Comic of the Week. These are staff picks.

interestingly enough, the comic started updating again, without me realizing, before this went up.

Hi Fes, sorry for the slow response to this but I’ve just got back onto the comic as you know and the first week back was hampered by major internet problems at our house when the router packed up and I was unable to sort out my wireless connection to the new one when it arrived either!! ugh!
Yeah, to be honest I would probably have ended the comic at Christmas if it hadn’t been for an unsolved murder left hanging and the fact that I’d always planned on having a reasonably happy ending to the whole thing. I started the comic about 6-7yrs ago now and although I still had enough new stuff in my head for one last chapter I pretty much overworked myself to the point where I just felt totally numb about continuing and began to enjoy the break so much that I was tempted to just let things rest as they were. But when I did start writing again I got the old familiar buzz back and within a week I was loving doing the art again too, so once again I have this nice warm feeling that I have a story worth telling and looking forward to the reactions to it.
Reviews like this are truly awesome btw and worth so much to us comic-makers especially as it was impartial and an honest view from someone I’ve never spoken to before. ‘The Duck’ has really let the amateur comics side of the site down badly in my view and has lost so many good artists and comics to other websites just purely because it doesn’t seem interested in maintaining the basic functions like messaging, signing in, loading pages etc that are so necessary, as well as the stats monitor for each comic which lets the makers know if they are doing the right thing or not. I’ve had no idea what my readership has been for two years now and it’s only when the nominations come out at the awards that I realise we do still have quite a large following.
But to round off, anyone whose produced a comic consistently for a number of weeks will know how important it is to mainitain self-motivation and enthusiasm to keep going regardless of ability and at times it’s so easy to sit back and think,’ why am I even bothering to do this?’ and that’s where the feedback from the readers is so vital. Just one single enthusiastic reader can be enough to help me shake off the indolence and get me excited about turning out more pages, so talented or not I’ve been very fortunate to have people like you step in now and then and give us that lovely pat on the back that makes it all seem worth while. This site looks really awesome btw and I have heard of you guys before but always had my nose too close to my own comic mostly to go exploring.

Looks like this was marked as spam! Now approved! Glad you got a second wind!