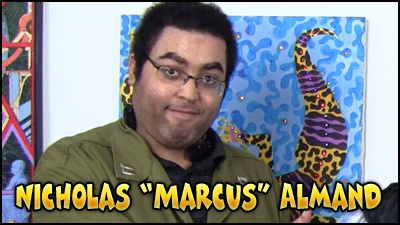 Dear friend and fellow creative, Marcus N. Almand, has lost the fight to cancer this past week.

Most people on this website would know Marcus from the First Issue comic book review videos. He brought the writer’s perspective to the team. We have not been doing many of these videos since he was diagnosed with cancer over a year ago. It has been a struggle for him with surgery and chemotherapy, but Marcus continued to strive forward creatively.

Others may remember Marcus from his original, independant comic Razor Kid, as creator and writer. Others in the industry, particularly at OniPress, know him as a co-creator and writer of an trilogy of graphic novels that were in the works. He was also a contributing writer to the Harvey Award-nominated Uniques Tales anthology. Additionally, Marcus was in the process of writing a novel, Sons of Nowhere, sending periodic updates of the writing process to friends and peers. He even had a card game, based off of one of his comic book ideas, that he was working on in beta.

There are actually, at this time, four un-edited, unreleased episodes of First Issue in which Marcus is lively on camera; including his appearance at CONvergence 2013. We will work to get these final videos out as soon as possible.

Marcus often attended movie nights with friends. Very jovial and interactive. Just a pleasure to be around.

Marcus. You will be missed.