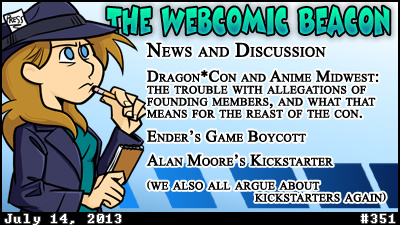 Monty Rhode, Kittyhawk, Ben Carver, and Fes Works for another week of comic news & discussion! We argue again about Kickstarters as well look at one from Alan Moore. We are largely discuss scandals with a founder of Dragon*Con (and what the con ultimately did to get rid of him), and a look at accusations against the founder of Anime Midwest and many other anime cons in the midwest.

Dragon*Con co-founder, Edward Kramer finally removed from the convention as it rebrands.
Edward Kramer was receiving profits from Dragon*Con to keep him out of jail and facing trial for accusations of being in the company of underage boys. The board has been trying for years to buy him out for years, as protest and boycotts of the con have mounting. Now they are rebranding as Dragon Con, and will not have Kramer part of the convention any more. (Bleeding Cool)

Founder and operator of Anime Midwest, Anime-Zing! (and other conventions) accused of rape.
A tumblr post with over 10,000 notes and a deleted original post, includes 3 pages of a scanned Iowa Davenport Police Report. It accused the convention runner Ryan Kopf with raping a subordinate at one of the conventions he runs. It is confirmed to be an authentic police report, but the victim has not pressed charges. (Detailed analysis here)

Alan Moore Bickstarter
Alan Moore has successfully financed the final three shorts of his series Jimmy’s End through Kickstarter.    Believes the revolution will be crowd funded. (Salon.com, The Gaurdian)

Ender’s game boycott
While the creator Orson Scott Card is a bigot, Lionsgate, the studio, is begging people to come see the movie on its merits, not its creator. It is very hard sometimes to separate the creator from the story. However, the studio probably is only doing this for money (Comic Book Resources.)

Charles Carreon Pays Up
Remember that guy who sued The Oatmeal for Funny Junk? We never actually heard the end of that on the show (mainly because Eric stepped down and we didn’t keep up on it. But here’s what happened in April 2013 (Ars Technica)

Mentioned on the show: Red Bubble