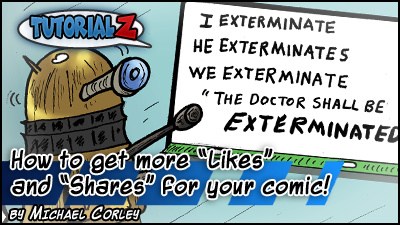 Have you ever had someone share a comic of yours on Facebook or Twitter? Feels pretty amazing, doesn’t it? But if we’re honest, that’s not something that happens too often. Why? People share articles and videos and cats riding cleaning implements all the time – why not your super awesome comic?

I can’t magically make all of the internet love you or your comic. But I can show you what makes people share content on the web, and how you can craft your work to make it Super Sharable! 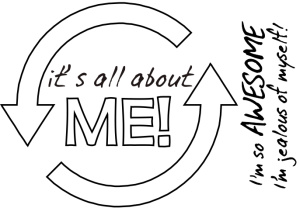 “Wait, what? How can it not be about me? It’s MY comic we’re talking about here!”

No. You don’t matter. Your comic doesn’t matter either. Nobody cares about your comic except you.

Sure. Fine. There’s a guy and he’s in a cave. Great. Who cares? I would never, ever try to convince someone to share this comic. I’m not slamming my own comic for content, it’s a perfectly acceptable comic strip as part of a larger storyline. But there’s nothing in there to resonate with a reader that would motivate them to share it. They consume it in seconds and move on to the next thing on their reading list.

Now, take a look at a one shot comic I published about Superman and Krypto the dog:

Would anyone share this? Hell yes they would (and did)!

If you saw this and decided to share it, what does it say about you? That you have a kind heart. That you love pets. That a dog’s nuzzling can bring to joy to the saddest person. Yes, there may be some who share this because they like Superman, but the main reason you would share this on a social media is to say, “Look everyone. I’m a dog lover. Dogs bring me joy and happiness. I want to share the way this comic makes me feel because I want you to know how special dogs are to me!”

I share this because I’m a fan: Is your content a joke about Doctor Who? A Star Trek fan art? A storyline where Xena Warrior Princess meets Wonder Woman? People tend to share content of this kind because it tells the rest of the world what kind of fans they are. Think of your comic like a T-shirt they’re showing off to the internet.

I share this because it’s my sense of humor: The same mother who posts pictures of adorable kittens playing with string would never post a clip from a horror film. People laugh because the joke of your comic resonates with them. They want to share that feeling with others to reinforce that’s the kind of humor they possess.

I share this because it’s what I stand for: An offshoot of the last, people share articles and pictures and yes, comics that reflect their beliefs. Does your comic have an advocacy for gay marriage? People who believe strongly in that right are going to be quick to share it with others. 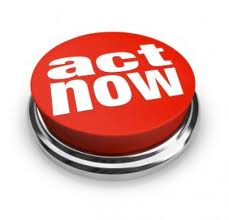 3: Make your content sharable with one, clear call to action.

Have you ever glanced at the bottom of a comic and it looks like the social network icons are all forming a mob? I’ve seen some with DOZENS of “sharable” links below. Does anyone even use Digg anymore?

Pick one and run with it. It has been proven again and again the more choices you give a person, the more likely they are to make NO choice!

Think of it this way: Imagine you heard a radio commercial offering plumbing service and your toilet just jammed up. You’re interested, but the last half of the ad tells you to call their north number, or their south number, or go to their website, or stop by their store and here are their two locations…. Auuuugh! Odds are you would remember none of it in the jumble and confusion of all those numbers and addresses.

But what if instead the commercial ended with, “We’ll fix your plumbing problem today! Just call 555-CRAP!” You wouldn’t just call. You’d be laughing your butt off as you called!

So instead of a sea of social icons below your comic. Why not have a popular character standing next to a giant Facebook logo saying, “Hey, did you like this comic? Then, you know, LIKE it on Facebook!” You could even create several for the major social networks and rotate them out, but just one per post, please. Here’s a link http://www.scratchtheweb.com/2013/03/create-custom-social-sharing-buttons.html on how to create custom share buttons if you’d like the details. But whether you want readers to share content, comment or go to your store pick ONE THING and TELL your reader to do that one thing!

I hope these three points have been helpful for you creating more sharable content – Create content that’s for your readers, not you, that tells others who they are as a person and give them a clear, single way to share the content.

If you liked this article, and found it helpful, comment below! (See? See what I did there?)

Michael Corley has worked in the Advertising and Marketing industry for over 15 years. You can read his comic, Vox in a Box at voxboxcomics.com

Good stuff. I kept going back and forth about which and how many share buttons to use, before I decided to just stick with FB, Twitter, and G+. I keep meaning to do the ‘character saying share’ thing too, just haven’t got around to it yet.

[…] You can read the whole article here:  http://www.webcastbeacon.com/how-to-get-more-likes-and-shares-for-your-comic-by-michael-corley/ […]

Great ideas, especially if you’ve got a great sense of humor. I wonder what the solution is for the less witty among us. I am just no good at wrapping my brain around short jokes or ideas, unfortunately.

Michael, you did an excellent job summing up some great points on the fine art of Sharing. I especially loved that it’s not about the creator, but the person doing the sharing, that is so true!

Great points. I love the idea of having a character pointing out the share button. And it’s true, I almost never share when there are a ton of different types of share buttons. Thanks for the great article!

Also, the little bat character made me want to leave a comment.