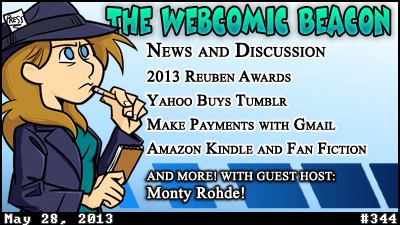 Once again, there was an “after show” discussion. Got a little heated… and a little ugly… as we talked about advertising and Blip.tv, but it all turned out OK in the end. The “after show” is actually something that was long ago offered during our TalkShoe days. So if people like this extra, not-really-webcomic-beacon content, let us know! Same goes for the pre-show (which I try to keep much shorter).

A coming episode of The Webcomic Beacon will be our opinions on Strip Search.

2013 Reuben Awards
The NCS (National Cartoonists Society) takes another wack at integrating webcomics in the fold and apparently there’s some controversy because all the short form web comics are from the syndicated site GoComics.com. Comics Beat reports that this is the first time they had a “webcomics” category.

Complete list of winners on Reuben.org.
– 2012 Nominees for comparison.

Kindle Worlds
Amazon Kindle launches option for fanfics to actually get exposure, actually earn money, and pay royalties to the actual copyright holders. As found on Endgaget.
Extra News Flash: Fanfic writers still manage to bitch (about the contract terms). We discuss this on the show.

You can now Email Money through Gmail.
With Google Wallet and Gmail, we can now send and receive money. What may this mean for creatives selling their work? HOW does this work, in relation to how PayPal already works?
Google Commerce Blog post – More on Google Wallet
But if you’re selling physical goods, you won’t be able to use Google Wallet; also, Google ends Google Checkout, as reported on MakeUseOf.

PayPal Screws Over German Kid, German Kid Screws Them in Return
So PayPal has a bug hunt program, which has made them one of the most secure sites on the Internet. Recently, a 17 year old kid found an exploit and turned it in for the bounty. PayPal, being as they are, said that the kid was too young to receive the bounty, so the kid released it into the wild. As a pentester (Kittyhawk) I’m familiar with the phrase, “Too young to get the bounty, but not too young to go to jail.”
In the meantime, don’t go to PayPal with any other windows or tabs open, and especially DO NOT USE INTERNET EXPLORER. It runs in the background of Windows, so you can’t be sure it’s running or not.

NOT MENTIONED ON THE SHOW:

Chainsawsuit Podcast
Was going to title this ‘new Chainsawsuit podcast’ but those crazy fellas (Kris Straub and Mikey Neumann) over at Chainsawsuit are already up to three! The podcast can be found over at www.chainsawsuit.com or on itunes, and may be of interest to anyone who follows the old Webcomics Weekly gang (or a podcast being produced for free…)