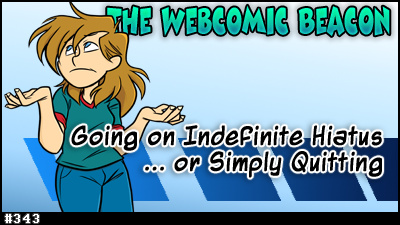 Fes Works is joined by Mark Savary, Kelly Turnbull, Arne Schulenberg, Eric Kimball, Jason Dunstan, and Tom Szewc for this… sad but very real possibility for most webcartoonists. That’s right, you’ve gotta know when to fold ’em, and put your webcomic on an indefinite hiatus… or… to simply quit. An absolutely enlightening discussion.

Break Song: It All Makes Sense At The End by Molly Lewis

To Be Clear…
The “old format” of The Webcomic Beacon will officially retire on it’s 6th anniversary: December 6, 2013. 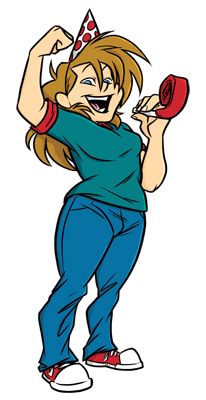 The Webcomic Beacon’s “Top 100 Favorite Webcomics of All Time” four part series, a retrospective episode, and likely one last contest or giveaway with a “Semi-Finalé” episode .

The Webcomic Beacon (as it has been known) will go out with BANG!

The comic news and discussion episodes will persist as long as there is interest, over the summer and beyond the 6th anniversary. There may be occasional topic or interview episodes over the summer, as well.

From here on out, the focus of The Webcast Beacon Network will be in expanding content to outside the podcasts themselves; as well as looking at the creative drive and process in multiple mediums. I will be scouting for content contributors, as well as new podcast affiliates.

Anyone that thinks they could help out with the WCBN or WebcomicZ in some way can email webcastbeacon-at-gmail.com or webcomicz-at-gmail.com. Though I will be looking into adding a content submission form as well. Any new creative-focused-podcasts, of differing medium focuses, could also try to court us, but I’ll be looking for a variety of factors for when looking at new affiliate programs (or even regular content producers).

So, hopefully Webcomic Beacon listeners can catch up on their backlog of episodes, as we slow updates until Fall 2013.

Awww, summer hiatus? You want me to have to go outside?! (Yes, we LOVE listening to you and Ben go at it, it’s fantastically entertaining!)

Thanks for what you do, Fes and everyone, I enjoy listening to the shows 🙂

Summer is just too damn busy with Cons (especially here in Minnesota), Even the newscast episodes are getting a tad wonky to schedule, but I’m still trying for “about every other week”.

God bless you Fes, has it really been 6 years? It does not feel like it. I remember listening in way back in 2008.

I confess, I haven’t been a listener for a few years, but I will be sad to see the Webcomic Beacon ending its usual broadcast.

Although, talking about hiatuses… Jayden and Crusader has gone on hiatus more times than I can count, but it always comes back, like a boomerang or a lingering smell of rotting milk.

It will be 6 years this winter. I had meant this to be the last “non-newscast” episode until this Fall, but there were just a few more things to record that came up. There will be two more non-newscast episodes in June, and likely just Newscasts for July, August, and maybe September.

Speaking of which, I am having fun with the new Webcomic Beacon format with Ben, Terence, and guests. It’s not the same, I know, and I’m not going to pretend it is.