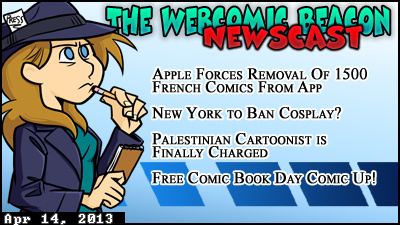 TV’s Mr. Neil joins Ben Carver, Terence,  and Fes Works for another edition of the newscast! We discuss Apple forcing a company in removing content, with vague parameters; New York to ban Cosplay?; and a follow-up on the jailed Palestinian Cartoonist.

Apple forces removal of 1500 French comics from iBook app
Izneo, the digital distributor which handles the top ten comic book publishers in France, has been forced to slash nearly 40% (1500)n of the titles they stock through the Apple bookstore due to content “considered pornographic for Americans”. As reported by Bleeding Cool

New York to Ban Cosplay?
Brought up by Bleeding Cool as a potential issue for cosplaying at conventions; the legislation introduced was actually brought on by costumed street performers. As reported originally by the New York Daily Times, people are in costume as various copyrighted characters around New York, while there are no conventions, either performing or posing for photographs for tips. Some of the problems include assault and groping. Legislation would look at regulating cosplaying, including getting permission from the copyright owners. While a legitimate concern may be there, it could technically affect conventions and the target and paying audience to them.

Palestinian Cartoonist Sentenced
Pursuant to our mention of Muhammad Sabanah, the Palestinian cartoonist arrested by Israel in February, has finally been charged to 5 months jail time and a fine of $10,000 shekels (about $2750). for “contacting enemy entities”. It was noted in the article from FARS news service (linked to by the Daily Cartoonist) that Sabanah is famed for his political cartoons which focus on the Palestinian people and their problems in the Israeli-Palestinian conflict.

Special Relationships
The recent update at PvPOnline (Friday 5th April) highlights some of the greatest things that the webcomics model/medium offers it’s readers – the story Kurtz tells in the blog post is that he received an email from a reader regarding an imaginary friend that their daughter had created, which was related to Skull the Troll (character from PvP) – The result, after a short communique between the adults, was a new strip introducing that character to the public, and to the canonical PvP universe.
I don’t know if there’s a lot of precedent for this in cartooning, but it seemed a sweet story, and something closely related to the thinner barrier that can exist between the webcomicker and their fans.

Ben strikes me as a highly intelligent individual and I don’t mind the fact he’s sharply opinionated. I believe he can be a strong addition to any episode he’s on. The issue is that he:

A) Makes very strong assertions and doesn’t back them up with facts or evidence unless someone else prompts him. Until someone squeeze that information out of him he just sounds like a self absorbed arrogant blowhard.

B) Tends to go on personal political tangents that start out remotely linked to the subject matter, but get further and further away from the topic as he self indulgently rambles about his personal beliefs.

In other words Ben needs to back up his assertions and stay on topic. It would also help if he would realize when he’s not adding to the conversation and stop talking, rather than continuing to go on because he seems to like hearing his own voice.

I think Ben has the same problem as I used to have (and still kinda have), when it comes to talking over or interrupting people. I don’t feel he’s purposefully doing it to just hear himself speak, though. It’s been something I’ve had to work on, myself.

I do enjoy the back and forth between me and Ben, because of how much crap we give each other, but yeah, that does kinda drown out the other hosts and guests. Something to work on, for sure. Thanks for commenting!