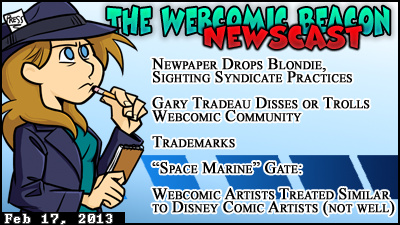 Terence MacManus and Fes Works are here to bring a return to the Webcomic Beacon Newscast! We’ll be looking at comic news from the past two weeks, to discuss a handful of items that caught out interests. Comic news discussed includes why a newspaper had decided to drop Blondie, one of the oldest running newspaper comics still in print; Gary Trudeau (Bloom County) creates a comic strip that either shows he doesn’t support webcomics, or is simply trolling everyone; Games Workshop muscling on a independent writer over the apparent trademark of the very common phrase “space marine”; and Don Rosa talks about the way Disney Comics treats it’s artists, what he did to try and maintain SOME level of control, and we discuss how Disney’s practices are actually reflected in many webcomic artist/writer teams.

WCBN Notice: We are still looking for more potential newscast crew members and guest hosts as we move forward with the newscast and the new format. If you would like to be considered, email us at webcomicbeacon@gmail.com and be sure to read this post for more information!

Duluth News Tribune cancels “Blondie”, cites King Features Syndicate practices as cause.
The Duluth news tribune has cancelled its 76-year run of Blondie as of Feb 6 2013. The reason for this was given in this article on the 2nd (http://www.duluthnewstribune.com/event/article/id/257578/) and was again summed up by Kleefeld on Comics (http://www.kleefeldoncomics.com/) on Feb 5th.

Doonesbury Damns Digital Distribution! … or Trolls It
We’ve probably all seen the storm in a teacup that arose over Trudeau’s strip on Feb 2 2013 by now (http://www.gocomics.com/doonesbury/2013/02/02, also http://doonesbury.slate.com/strip/blowback, http://dailycartoonist.com/…react/, http://adamthealien.tumblr.com/…a/, http://www.kleefeldoncomics.com/ and no doubt many other places) – The strip in question seems to have been interpreted in many different ways, ranging from a heartfelt disparaging of webcomics and digital content, to syndicate-aimed satire.

Popehat Signal: Help An Author Against A Bogus Trademark Claim
Games Workshop, owner of the Warhammer series, is suing in independant writer, MCA Hogarth, over the word they claim to have a trademark on: “Space Marine”. In spite of those words as a phrase being used in fiction numerous times. MCA Hogarth has also appeared on Webfiction World (part of the WCBN).
http://www.popehat.com/…trademark-claim/

Marvel and DC Sue Small Publisher Over Using The Word Superhero (again) – Blastr.com
Both Marvel and DC send indy publisher Ray Felix of Cup O’ Java studios, a cease and desist, over his comic, A World Without Superheroes. DC and Marvel apparently own joint rights to the term superhero and all its variations including foreign languages. Ray is contesting it and has chosen to go to court against Marvel and DCs lawyers. http://www.blastr.com/…superhero
Another article on this, with much the same information: http://www.worstpreviews.com/headline.php?id=27388

Don Rosa Speaks about Disney Comics’ Practices
Originally intended to appear as the epilogue to The Don Rosa Collection, a series of 9 books detailing his life’s work with comics (particularly Scrooge and Donald Duck). The article was published online instead of appearing in the book collection, as Disney refused to let the book be printed with the epilogue attached. The epilogue (“Why I Quit”) deals with numerous personal reasons behind Don Rosa’s retirement from Disney Comics, but highlights the number one reason as being Disney Comics’ practice of not paying any royalties to its writers/artists for the continued use of their work.
Link to article: career-end.donrosa.de/