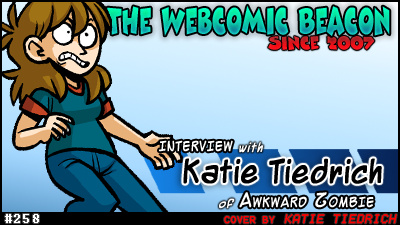 Katie Tiedrich joins Fes Works, Mark Savary, and Kelly Turnbull to talk about her gaming related comic, Awkward Zombie, which is full of Smash Bros., TF2, Mass Effect, Legend of Zelda, and Fire Emblem jokes! As well as her other endeavors. We had a really fun time, but things did end up getting a little awkward towards the end. Why? Blame Fes. We also talk about what conventions we may be attending this year.

Cover Art:
By Katie Tiedrich
(If you’d like to contribute your own art, see here.)

Show Music:
The King of Awkward Conversations by Pro Audio
Found on MusicAlley.com

Fes also appeared on Obsessed (with Joseph Scrimshaw), so please go check out the episode where Fes talks about his obsession with projects!

The Webcomic Beacon is gearing up for Webcomic Blind Date 2013! Email us at webcomicbeacon@gmail.com as either a comic WRITER, a comic ARTIST, or as BOTH (with preference, if any); to get paired up to create a Valentine’s Day 2013 comic with another creator as a “blind date”! (More Info)