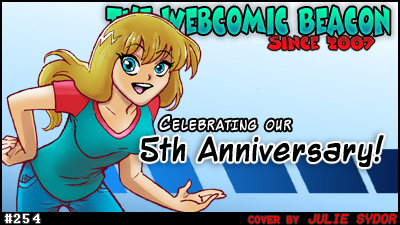 It’s the 5th Anniversary of The Webcomic Beacon podcast! Tanya Higgins rejoins Fes Works, Mark Savary, along with Kelly Turnbull, for this very special episode! We talk with Tanya a bit about what she’s been up to since she stepped down from co-hosting the show.

Eric Kimball comes on the show to talk about his work on The Webcomic Beacon Newscast, and ideas they have for the future of the show. Shortly after Jules Rivera ALSO returns to the show to chat with us.

Additionally, I checked to see who was the most frequent guest on The Webcomic Beacon podcast. Excluding other Network shows, a quick search shows; Melissa Kaercher comes in with 9 appearances, Alex Heberling with 8, Jules Rivera with 5, and Yamino, Megan Rose Gendris, and Ben “BAR-1″ Rodriguez, each with 3…. Because some people may be wondering that. Though, out of 250+ episodes, I could be missing some people that have 3 or more appearances.

► PRIZES! Listen for and email us the PRIZE KEYWORD of THIS EPISODE, and you could with a “Cartoony, Color Headshot” of YOU for your online avatar or
profile picture, drawn by Diana Nock… Also, a copy of Poorcraft: The Funnybook Fundamentals of Living Well on Less graphic novel, or a copy of the 2 volume set of the Family Bones graphic novel by Shawn Granger!
Winners: ? – Deadline: Dec 29th, 2012

It’s the 5th Anniversary of The Webcomic Beacon podcast,
and prizes are waiting to be won!

► Listen for and email us the PRIZE KEYWORD of the Interview with Mark Waid episode for a chance to win a Free Video Advertisement Slot on First Issue, and/or pick any comic book issue for the First Issue for us to review!
Winners: 1 – Deadline: Dec 29, 2012

► *More information and details on prizes and how to win ◄

Cover Art:
By Julie Sydor of SnowFlameComic.com
(If you’d like to contribute your own art, see here.)

Show Music:
T-Rex Has Feelings by Hello, The Future! off of Infinity Right Now. Its a song inspired by Dinosaur Comics.
Gimme Gimme (A Christmas Lullaby) by Phil Johnson and Roadside Attraction from TheFuMP.

Additionally, Eric’s new “News Roundup” video episodes that we talked about: DC vs Unforeseen Consequences, and The Law is Not Frivolous; both now with MP3 alternatives!

Not mentioned on the show, but you should probably check out if you are a creator: The Webcomic Beacon is gearing up for Webcomic Blind Date 2013! Email us at webcomicbeacon@gmail.com as either a comic WRITER, a comic ARTIST, or as BOTH (with preference, if any); to get paired up to create a Valentine’s Day 2013 comic with another creator as a “blind date”! (More Info)