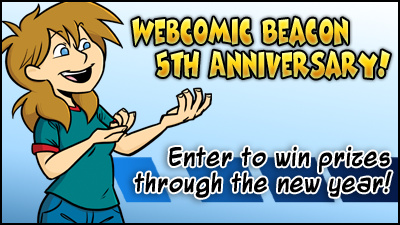 The Webcomic Beacon started in December of 2007, and we’ll be celebrating the 5th Anniversary starting now, through the end of the year! I’m not really sure what to really do for a BIG show (just yet), but I am totally going to be giving prizes away!

Stay tuned to this post and @WebcomicBeacon for future updates on chances to WIN PRIZES! For some, you will need to LISTEN TO CERTAIN EPISODES (they will be marked) for a PRIZE KEYWORD to email to WebcomicBeacon@gmail.com to enter and win the mentioned prize! I’ll mention in the blog posts what prize is up for grabs.

Potentially more prizes will be added.

EVERY E-MAIL ENTRY MUST HAVE:

*Completely random, and content is subject to what each announcer would be comfortable speaking.
¹Advertisement must meet WCBN sponsorship qualifications.
²Choice of comic for review must be supplied, easily/affordably obtained, or be something we already have. Must meet First Issue qualifications for review. Submit your own comic for review at your own risk only.
³Will require 18+ verification via submitted scan of State/Government ID. License #, bar-codes, and address can be blurred. Do not enter if you don’t want to do this.

ALL INFORMATION IS KEPT PRIVATE,
AND WILL ONLY BE USED FOR THESE GIVEAWAYS!