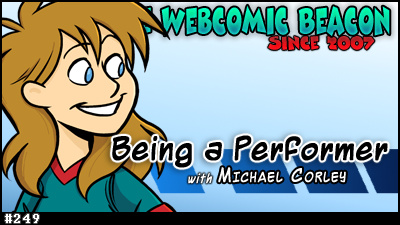 Michael Corley (Vox in a Box) joins us to (eventually) talk about his comic, as well as tell us all about his performing career and how to be the best performer you can! Join the show with Fes Works, Mark Savary, and Kelly Turnbull!

Music: Ask Your Doctor by Neal Fox on MusicAlley.com

This is a Webcomic Beacon 5th Anniversary PRIZE EPISODE! Listen for the PRIZE KEYWORD (towards the end of this show), and email it to WebcomicBeacon@gmail.com (with your first name, last initial, and state); for a chance to win a Personalized Voicemail Message recorded by Mark Savary, Fes Works, Witchiebunny, or Michael Corley! There are FOUR potential winners here! Prize #3 Deadline: December 1st.

Additionally, another prize is up for grabs, with that same due date! Email WebcomicBeacon@Gmail.com with a question for either The Doubleclicks or Molly Lewis, aka The Ladies of Ragnarok! If we get enough question entries, one of them will be picked as a winner and win the latest album from both The Doubleclicks (Chainmail and Cello) and Molly Lewis (I Made You a CD, But I Eated It)! Prize #2 Deadline: December 1st.

More information and details on prizes and how to win.

[…] or Michael Corley!* How to Enter: Listen for the PRIZE KEYWORD to be announced on the Being a Successful Performer, with Michael Corley episode DEADLINE: December 1st, 2012 FOUR prizes/winners total – Prize […]

The other Kelly Turnbull(I guess) has a Bacon degree of 4: http://s15.postimage.org/l9ov4dayj/kelly_bacon.jpg