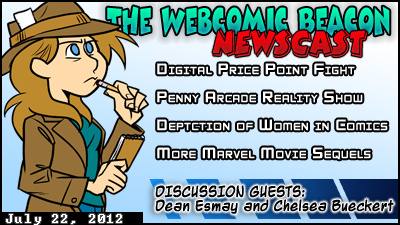 Dean Esmay (Dean’s World) and Chelsea Bueckert (Mysti’s Domain) joins in on this week’s webcomic and comic news discussion, starting off by talking about the Digital Price Fight that happened at SDCC, Penny Arcade’s Reality Show idea, and the display of women in the comic industry. Marie Tary head this week’s show with last week’s comics news brought to you by Jason Strawsburg and Eric Kimball!

Marvel announces it will continue making sequels to everything and then some other stuff
Original Source: Boing Boing

Things are looking better in the comic market
Original Source: The Comics Chronicles

No, Kickstarter is Not the #2 Graphic Novel Publisher – OpEd
Found via: Robot 6
Original Source: Tor.com

Batwoman needs to start purging according to comic book pros
Found via: Onezumiverse
Original Source: Escher Girls
Additionally: The up side is that it kind of leads to a job offer

[…] you want to hear me on radio, listen to this week’s Webcast Beacon Comic News & Discussion for July 22, 2012. We talk about XKCD, Penny Arcade, the recent Batwoman controversy, and a whole lot more. I might […]

Looks like we forgot to add this. Matt Welch’s piece on Reason.com on irresponsible half-assed media speculation: