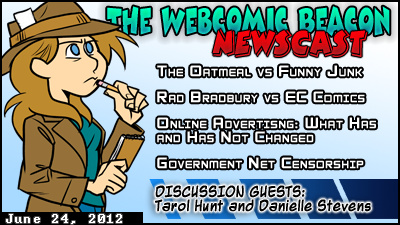 Tarol Hunt and Danielle Stevens (Goblins) join in on this week’s webcomic and comic news discussion! This last week’s comics news is brought to you by Jason Strawsburg, Eric Kimball, and Marie Tary! Tarol also calls out and confronts Thom on his opinions on Tarol pulling Goblins from the Top Webcomics List site.

The Webcomic Beacon Newscast’s producer would like to remind our listeners that all show participants speak for themselves, only.

ReviewZ: The PHD Movie. Based on the Piled Higher & Deeper webcomic.
Review by Caitlin Hart

Funny Junk vs Oatmeal
Description: This one takes a bullet list to explain (please note: dates are estimates only):

Additionally: A summary of the above from Media Post
Additionally: The Guardian brings us back to a discussion of copyright theft

We are living in the creator owned comic book era
Original Source: The Beat

How Ray Bradbury responded when two of his stories were lifted in 1951 by EC Comics
Original Source: Oz and Ends

What has changed and what hasn’t in online advertising
Original Source: GiGaOM

Government Censorship of the net increased by 103%
Original Source: GiGaOM

Another look at collaboration in comics
Found via: Bleeding Cool
Original Source: CNet

What to consider in a Digital Marketing Plan
Original Source: Editor and Publisher

Help save a dead comics creator from burial in an unmarked grave
Original Source: Blastr

[…] Hey everybody, check out Danielle and I being smart asses (well Danielle was as polite as ever) over at this podcast! […]

[…] by the turbulence between Charles Carreon, The Oatmeal, and the internet (as discussed in the Webcomic Beacon Newscast for June 24, 2012); so he went out and did a few interviews with lawyers and people who have had experience with such […]