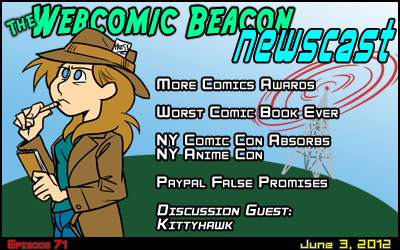 Kittyhawk (SGVY) joins in on this week’s webcomic and comic news discussion! This last week’s comics news is brought to you by Thomas Revor, Eric Kimball, and Alex Heberling.

Claws Are Out for The Eagle Awards
Original Source: The Beat

Is a new distribution war looming with Digital Exclusives?
Original Source: The Beat

And then he backtracked his statement to say that Paypal was going to focus on books that contained “obscene images of rape, bestiality or incest” and was going to use the US Supreme Court’s definition of obscenity. Furthermore that things would be done on a product-by-product basis, not by seller account.

Unfortunately, these statements appear not to be the official policy.  In Paypal’s acceptable use document they still state that PayPal prohibits the sale of “(f) items that are considered obscene.”  It does not mention illegal nature or rape, bestiality, or incest.

A call to Paypal’s Brand Risk Management Department (the department in charge of enforcing the acceptable use policy) muddied the waters futher.  The paypal representative stated:

• www.thepaypalblog.com is not part of paypals official corispondence and anything posted there is not company policiy EVEN if it is posted by the president of communication.
• Paypal’s pollicies have not changed and they will ban any account for selling “(f) items that are considered obscene.”
• Brand Risk Management investigator is the sole arbiter of what is considered obscene.
• Any image containing a nude figure is considered obscene not just one with “ rape, bestiality or incest.”
• Specifically Paypal’s Paypal’s Brand Risk Management department defines obscene as anything that could offend. So basically if someone reports your site complaining that they were offended they will shut you down.
• If a seller sells any product that violates the  obscenity rules their entire account will be permanently suspending.

Things will not be done on a product by product basis.

These statements are particularly confusing since www.thepaypalblog.com states it is “The Official Place for All Things Paypal” .

In short we have two stories coming out of paypal with two different standards for what is acceptable products and the way violations will be handled. Since the legal documents have not been changed and still contain the broader definition of obscene it seems the official policy is not as Mr. Nayar presents it.

A request for further information was sent to both Nayer and PayPal Brand Risk Management department but they have not replied at the time of this broadcast.

How to Pitch your Comic
Original Source: Bleeding Cool

Keeping Your ComiXology Comics (UPDATE)
Original Source: Bleeding Cool
Additionally: Comixology shut down the distributilon of this solution AND tracked everyone who used it