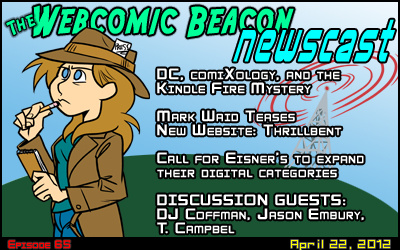 There was some contention after the recorded show, in regards to some comments during the discussion. Please check the first comments for for those details from DJ Coffman and Jason Embury.

ReviewsZ: In His Likeness Universe
Webcomic Review by Caitlin Hart

The mystery of DC, ComiXology, and the Kindle Fire may never be publicly solved
Original Source: Comics Beat

Wizard Teams With ‘The Situation’ for a Superhero Comic and Convention Appearances
Original Source: Comics Alliance

Someone has invented the Sonic Screwdriver from Doctor Who
Found via: Tor.com – Original Source: The Mary Sue

There was some contention, after the recorded show, on twitter with Jason Embury and DJ Coffman. So, here is the conversation from twitter:

Jason Embury
@WebcomicBeacon Thanks for having us on the podcast guys! While we didn’t all agree, it was GOOD to hear so many opinions on digital #comics

Jason Embury
@djcoffman @WebcomicBeacon I think the big misconception, is to think of this like Zuda or anything that has gone before. different tech..

Jason Embury ‏
@djcoffman @WebcomicBeacon u can’t compare the ventures whn the parameters around them are so completely different.

WebcomicBeacon
@JasonEmbury @djcoffman I have yet to list to the show, (this is Fes), sounds like the show got a little interesting.

Jason Embury ‏
@WebcomicBeacon Fes, it was an HONEST conversation. Which is what u need in order to make any progress, more than 1 side to any story

Jason Embury ‏
@WebcomicBeacon @djcoffman what I hope comes across, is that there is no WRONG answer here. from any1. just different experiences/tastes

D.J. Coffman
@JasonEmbury @WebcomicBeacon but also a difference between an opinion and making weird statements as facts (T)

D.J. Coffman
@JasonEmbury @WebcomicBeacon Refering to T saying Mark Waid doesn’t give props or to webcomics. He does it all the time. Just not YOURS

Go listening to around the 48:15 mark, the opinion about wanting to win an Eisner or award because you think it equals money and airfare is redonkulous, and makes me a little sick to my stomach. Just sayin.

Listening back there seems to be a lot of weird bitterness on the indy webcomic creator side of things. There are a lot of comments like “well I can’t get that…” or “Well I was doing this long before…” — stop trying to plant meaningless flags in things or feeling upset that you or “webcomics” isn’t getting the credit it’s due and instead focus on the craft and get involved. The comments about Mark Waid wanting to relive the 90s??? WTF does that even mean in context? There were no digital comics in the 90s (really) and barely any internet to boot. And we haven’t seen any of the new content from Thrillbent yet, but what I have seen is nothing at all like anything that was done before in this way. And I’ve been around. I guess my point is, be patient and see what’s coming before tearing it down.

Also… T Campbell is a terrible audio guest. He drones on and on and on and it just makes you want to go to sleep. Good lord almighty, I bet half the listeners won’t get through his first comment set…zzzzzz

Speaking in general: As always, I appreciate a range of opinion, especially if we have great disagreements, on all of the shows at The WCBN. I do hope that personal attacks stay at a minimum, if non-existent, of course.

I also hope that any misinformation, from ANY of the shows, is made known, and corrected promptly. Whether it had been made by ignorance, or on purpose.

Clearly there was some great disagreement on the show and possibly misinformation. I always prefer no animosity towards people, nor drama, in spite of existing online. I welcome our listeners to evaluate for themselves, as well as to check out Mark Waid’s twitter and websites, to form your own opinions.

Additionally, I would LOVE to win an Eisner, or any professionally recognized, or peer formed award. Mostly for the recognition and kudos. But also for what that award can mean for you. Yes, it CAN open up some opportunities.

It’s the website and community awards that, more or less, “worthless”. Yes, there is a matter of traffic, but they are chosen by votes of ANYONE, and not decided by a peer group. Such as the academy awards.

Certainly professional and peer awards have their politics and their own problems, but awards that REALLY matter is when your peers… or rather people more or less ABOVE YOU professionally, and in recognition, feel that YOU have what it takes and are producing good stuff.

Anyway, my point is that I don’t feel that ANY web/webcomic-based webcomics award has ever been qualified for an “overall” award that would compare to the Academy Awards and movies. And I’m not entirely sold that the established comics awards are ready to do that yet.

Still, it is nice to be recognized and awarded, but the existing webcomics awards are not end-all, be-all.

I guess I am pretty jaded when it comes to awards. I work in an industry that is driven on certification which are types of awards in my mind. With certs you have to be goal driven and keep your eye on the bottom line.

Is a CCNA better at managing a network than a non-certified tech? Not at all.

Does a CCNA get paid 10% than the non certified tech. Absolutely.

Given how unscientific all these awards are I don’t really see how there are a source of pride.

Is an Oscar winning movie the best movie released in a year. Probably not.

Also given the democratic nature of the web you don’t really need an award to tell you how good your comic is. 100 K uniques a day is 10 times better that 10K uniques. Every day we get direct feedback on our comic from the entire world. Why do we need feedback from a much smaller subset of those people? I mean comics are entertainment so if the comic is entertaining is succeeds at it’s goal. If not then it fails.

So I look at awards the same way I look at certs. If it furthers your career by increasing your profits (free con appearance) or your exposure (significant increase in hit) it’s worth perusing. If not there are lot easier ways to feel good about yourself. Volunteer for a soup kitchen, build homes for victims of a natural disasters.

I never got the whole “validated by my piers” thing. Again that may just be from working in IT where my piers are geniuses in a very specific set of skills and anything beyond that not so much geniuses. I would not trust MY piers to pick the best pie at a single entrant pie contest, they’d end up awarding the prize to the tablecloth.

I didn’t say “validation” by peers, I said “recognition”.

Also, yes, “Academy Award Winner/Nominee [actor name]” is higher billing potential than “[actor name]”. Same would go for Eisner Awards. A Convention is more likely to fly in and comp an “Eisner Winner [artist]” than an unknown artist. Why? Because the convention can, in turn, use that person as a draw for their event. They can put that on their website and advertisements: “Guest of honor “Eisner Award Winner [artist]!”

Of course, this only really works will well establish awards that are widely recognized and respected as “authorities”.

Now, of COURSE, people get to be guests of honor in their own rights, without an award. Most certainly. But you understand what I mean about the award title, in any case.

An recognized award only helps.

Now, any comic news site, or comic community, especially webcomic based, can have their own awards, but they really don’t amount to much except hopefully traffic and more peer recognition. But that award really won’t carry THAT much weight. Especially the ones that are “everyone can vote”.

The better award events are where the votes are merely nominee, or eliminations for a final round for actual judges to decide. But there is nothing currently in place that could speak as a true “academy award” for webcomics.

@drowemos
I think it would be inaccurate to compare certifications to awards, particularly something like technical certs to artistic achievement recognition.

Certifications are an achievement, yes, but not an award. Anyone with the inclination to learn the material and ability to take the exam can get one. They are a guarantee from a professional body that the person in question has assimilated a satisfactory amount of knowledge on a subject(s), much like a degree is. But the important thing is anyone who passes the test gets one. Its education not honors.

You are also comparing the technical field to the art/creative field, which is very different as far as career path and advancement/value works. Itâs not even like comparing apples to oranges; itâs like comparing apples to cars. Just try having the âwhat is artâ debate with a handful of fine artists, and youâll see why non-artists (ie: the suits who hire you) like to rely on a combination of awards and other people youâve worked for/projects youâve worked on to judge how valuable a talent a particular artist is rather than on portfolio alone.
The value of an award, ultimately, really isnât in the award, Itâs in how it changes peopleâs perceptions and values of you and your work. Oscar winning actors get paid more money. Award winning artists get paid more money, sometimes significantly more than 10%. You get projects funded; people who wouldnât give you the time of day are suddenly willing to talk to you; you get raises and respect; clients are more willing to pay you more; clients who didnât take you seriously suddenly do, etc. Itâs honestly a bit mindboggling if youâve never experienced it. Nor is it really logical. Donât try to apply rational logic to it, youâll just make your head hurt. But for an artist, peer recognition can be a hell of a lot more valuable in advancing your career than any certification or educational stamp of approval.