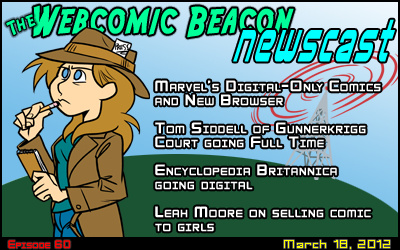 Marie Tary (Shifters: Redux) and Thereisnosaurus (Hero in Training) join in on the news and discussion of the past week with Eric Kimball and Jason Strawsburg. Links to items discussed on the show can be found below!

Spread the Word: Theft is Theft
Another scraper, this one found on Android OS
*Update* App has been pulled by Google.
Found via: @TeeMonster – Original Source: Chris Hanel

The Doctorow Doctrine and Other Techno-Tectonic Upheavals
– Part 3, Creative Commons

An article posted by Jim Shooter on his blog proposing a new model for comic book companies inspired by the writings of Cory Doctorow.

The first half of the article reviews Cory Doctorow theories on copyright with numerous links to his work. In short Cory Doctorow proposes a more open copyright system that does not penalize fans for promoting works.   From the the article introduces the concept of creative commons licence and giving links to the Creative Commons Foundation.

In the second half of the article Jim Shooter talks about how the battle over copyright is a problem for the current comic companies and proposes a new model for comics.  The new model propose companies centered around shared universe where creators are staff instead of work for hire, people who are invested in the good of the company.

Over all the article is a good review of the debated on copyright law and the arguments for and against it.

Coming to us from the Publisher’s Weekly Twitter is an announcement by Digital Manga that all of their titles have been pulled from the Kindle.  The reason for the suspension was a vague “content violation” citation without further explanation.  It is assumed that because Digital Manga is a large Yaoi publisher their account was removed under the heading of pornographic content which is restricted by Amazons user agreement.

Digital Media has stated that they are trying to work on the the suspension but then recommended a number of other platforms for users to find their products on so it seem they are not hopeful for a positive resolution.

An announcement by the Comic Book Legal Defence fund stating that after 2 year the charges child pornography for possessing Japanese comic books have been dropped against Ryan Matheson.  While the case is concluded the there are a number of troubling facts listed in the article from the vast miss treatment of Ryan by the Canadian border patrol denying him basic rights that he was entitled to the fact that he was banned from using a computer outside.  With support from the Comic Book legal defence fund Ryan’s court cost have been lowered from 75K to 45K.  The Fund is now working with Ryan to start a fundraiser to help pay off the remain debt.

Mouth and Jaw – by EponaGirl

Words of Advice on Colors – by AquaFeles