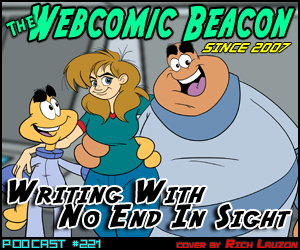 David Barrack (Grrl Power) joins Fes Works , Mark Savary, and Alex Heberling to talk about writing one’s comic without any plan in sight. We also have a few episodes we are planning, and may be looking for guests for those. Including writing comics WITH an end in sight; as well as deciding to end your comic, and how one would go about doing that.

Notes: Did you see the result of the 2012 Webcomic Blind Date? Well be sure to see the submissions here!

ADDITIONALLY: Are any cartoonists interested in doing something for April 1st this year? I was thinking about pairing people up to write the “end” of each other’s comics. So for the April Fools Day episode, every participant’s comics would “end”. Email us at webcomicbeacon@gmail.com if you want in!