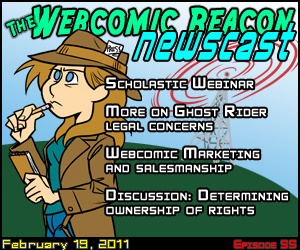 Trying something new with the Newscast format! Starting with strict news reporting in one segment, then discussion in another section. Give a listen then give us some feedback!

Kelly Turnbull (Manly Guys Doing Manly Things) joins in on the discussion this week with Thom Revor, Alex Heberling, and News Researchers Eric Kimball and Jason Strawsburg bring you this week’s edition of The Webcomic Beacon Newscast! Read all the news of the past week below. Some news not discussed in part, or at all, on the show.

There will never be another “Watchmen”
Original Source: The Escapist

How to Co-Create Comic Books
A look at the dynamics between a writer and artist for comics
Original Source: Parkerspace

How to write a Pitch
Original Source: Making Comics!

Telecoms must give shareholder a vote on net neutrality
Found via: Slashdot – Original Source: Business Week

“When is it not pirating?” and/or “When is piracy understandable?”
Found via: Robot 6 – Original Source: 4th Letter

How Subjective is Ownership of an Idea?
Original Source: The Comic Age

Rich Stevens to break being vegetarian to eat a pound of bacon per a $666 pledge on his Kickstarter
Original Source: Fleen

[…] And I was on the Webcast Beacon Newscast this week talking about the fallout from the Friedrich Ghost Rider case and the like, if anyone is […]