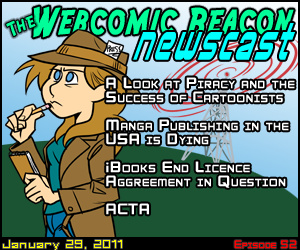 Jason Strawsburg, new associate news gatherer (and webfiction reader from the Webfiction World podcast), joins Thom Revor and News Researcher Eric Kimball. Read all the news of the past week below. Some news not discussed in part, or at all, on the show.

Yar! It be Talk Like a Pirate Day in February me laddies, (you know like Christmas in July) and the web be a buzzing about piracy of the intellectual property kind.  It seems the paper-lovers in the comic industry are lamenting the loss of their dear SOPA.  SOPA they say would have given them the right to censor websites without appeal or due process of law until they are dead as is only proper.  They say if their ilk is held to follow such silly things as the Constitution they’ll all but overrun by the scurvy pirate lot  and left without a doubloon to their name.

And yet their be others that say it’s not the pirates that are the problem but the business model.  These Scallywags say that piracy be only competition and if the comic industry just made their stock and trade a shade easier to acquire and of a higher quality the booty would be quite plentiful.  The examples the give are songs that will be sung by sirens them self that be true but the tales of woe far out number those of wealth.

Who be in the right?  That be a question far beyond the simple mind of this salty dog.  But that is the news I hear on the wind this day, that’s for sure.

Are cartoonists doomed to die poor and homeless while pirates dance on their graves?
How the Internet and the economy are hampering the ability of comic creators to earn a living
Original Source: Comics Beat

Why Manga Publishing Is Dying (And How It Could Get Better) by Jason Thompson
Jason Thompson talks about why the Magna industry is failing and suggests ways to prop it up.
Found via: Robot 6 – Original Source: io9

The about making “The Art of Pho” the motion comic
Julian Hanshaw comic inspired buy his time in Vietnam has been converted into a motion comic.
Found via: Bleeding Cool – Original Source: Huffington Post

NBC News Forms Publishing Division
NBC getting into the digital publishing game (aka “Those guys are making money on the interwebs. Let’s try that.”)
Found via: Engadget – Original Source: Publisher’s Weekly

Diesel Sweeties experiments with ibooks
Original Source: GiGaOM
Additionally: We got a little kickback on this from Stevens via twitter, and Stevens follows up on Google+.

The comic strip in the age of iPad: A talk with Stephan Pastis
Original Source: GiGaOM

Considering the extremely high costs associated with making a single self-published comic book series available across all of the aforementioned stores/platforms, Graphicly’s “distribution as a service” model makes perfect sense for most self-publishers.

Eric’s thought: I thought PDF could be read on everything and can be created with the click of a button so what is this high cost they are talking about?

“Those who count on quote ‘Hollywood’ for support need to understand that this industry is watching very carefully who’s going to stand up for them when their job is at stake…
…Don’t ask me to write a check for you when you think your job is at risk and then don’t pay any attention to me when my job is at stake,”

Judge orders Co-CEO Nancy Silberkleit ‘not to do anything’ for Archie
Original Source: Robot 6

Will the Graphic Novel save Journalism?
Original Source: psfk

Six ‘Avengers’-Themed Colognes To Assemble At A Store Near You
Marvel pushes cross marketing even futher
Original Source:  Geeks of Doom

HEY EVERYBODY! Apparently even now some people STILL think were running the SOPA  Strike thingy from last week, because some ISPs aren’t clearing their caches for weeks which is ridiculous! We did a fix that’ll hopefully “fix” stuff that needs fixing, but this means IF YOU ARE SEEING THE COMIC FOR THE FIRST TIME TODAY SINCE THE SOPA-STRIKE, YOU’VE MISSED A WEEK OF COMICS! They’re all there, go back and read them. The story makes more sense that way. 😉
-Pete from Sluggy Freelance