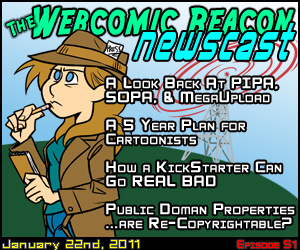 Steven Shinney (Digital Strips) joins us for a special interview and guest his week! Please join Thom Revor with Alex Heberling and News Researcher Eric Kimball. Read all the news of the past week below. Some news not discussed in part, or at all, on the show.

Disclaimer: Every person on the show speaks for themselves, and not as a representation of The Webcomic Beacon Network, its crew, audience, peers, advertisers, or affiliates.

PIPA/SOPA webcomic protest in brief
The SOPA protest was too epic to cover in full but comic alliance has a sample of a few pages done by webcartoonists. The short of it is that the protest on the 18th appears to have killed the bills, at least for this year.

The moral of the story is piracy is bad, irritating the Internet is suicidal.
Original Source: Comics Alliance

Justice department acts against Megaupload without PIPA/SOPA
It’s almost like they already had the tools to do their job and SOPA was just a dangerous over reach on sponsored by movie companies that didn’t understand the law or the Internet.
Original Source: Robot 6

Comic person of the year is a Webcartoonist
Three guess who it is and the first two guesses of Kate Beaton don’t count
Found via: Jason Strawsburg – Original Source: Comics Beat

This is why publishers are having a problem with digital
Original Source: Bleeding Cool