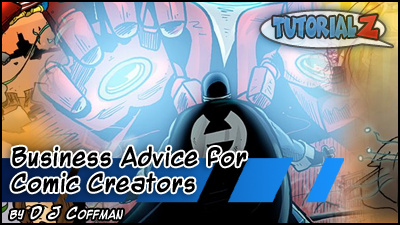 THINK BUSINESS….
Often times in the comic business I encounter creators who are pretty much afraid of dealing with contracts or treating what they do as a business. It’s totally fine to just draw comics for you or as a hobby, but when you want to do this for a living, be a commercial cartoonist and be successful then you need to start thinking with a business mind instead of just a creative one. For many creators, they just don’t wish to think this way, it’s either boring to them or troublesome to think about. Some comic creators don’t even realize they are IN the “entertainment business”, but you are. Everything you produce is being watched and recorded in that sphere. Many creators are leaving a lot of money on the table by being afraid to think like a business.

It’s really not all that hard to do, and you can make it fun as well if you are clever. Here are some tips and thoughts to keep in mind when dealing with the business side of the entertainment business.

#1 DON’T TAKE IT PERSONAL: In the past, I’ve worn my heart on my sleeve and wouldn’t work with certain publishers because of my own personal code of ethics. I’ve been offended by stories I’ve heard or things people have said to me in private that really make them seem like douchebags. It took me years to grow a thicker skin and not to take things personally. This not only applies to how you handle yourself professionally and in your work, but also how you take criticism online and in real life. When you find yourself feeling hurt by something in business, take a step back and reevaluate the situation and always tell yourself it’s not personal. Now, if somebody is actively trying to tear you or your work down instead of getting embroiled in a drama crap storm online, it’s much better to walk away. This is a two way street too! If you one day hear somebody say something stupid or you don’t agree with their opinions on a business matter, instead of lashing out at them online, just walk away and go back to worrying about your own business. Life is way too short to take anything, especially in comics, so seriously or hurt someone elses feelings.

#2 DON’T FEAR CONTRACTS: There is a train of thought within certain circles in the comics community that one should never work for hire or sign away rights to something they created. Often times the argument is that the contracts are just plain bad, or you will see essays online going over certain contracts and such and telling you why they are bad and why you’d be stupid to sign it as is. I agree… don’t sign bad contracts….BUT, don’t let a bad contract keep you from furthering your own career or building connections as well. My advice is that if there is a company or organization you are wishing to work with that offers you a contract, you read the contract, have a lawyer friend look it over as well, and if there is anything in there that you need clarified or doesn’t seem fair to you, highlight this and clarify how you’d like to see the deal done in your favor. You’d be surprised how many times a company has given me some standard boilerplate contract and I looked it over and told them there were a few sticking points I’d like hammered out. More often than not if a company has offered you a contract they will want to work with you and will be willing to make certain amendments to suit your needs. If they are adamant about keeping a contract “as is”, well maybe those aren’t people you really wish to do business with.

Come to think of it, I just counted 8 different big contracts in my career where I received a boilerplate cut and paste agreement and then negotiated something better. It didn’t take a lawyer either, just me sitting down and saying “this sounds off” and then telling them how I’d like to see it worded or structured. I can’t think of one time I ever wanted amendments and the other party didn’t agree.

#3 DON’T TAKE IT PERSONAL part 2: If you do receive a bad contract or a deal goes sour for you, don’t take it personally. Don’t turn it into some crusade against the people running that company. It’s just going to make it look bad for you, even if you’re actually on the right side of the argument, other good companies who like you may be leery of being involved in any controversy. If you’ve made “enemies” in the past online, they WILL do things behind your back to help ruin deals for you. It’s not just petty creators either, I know of some big names who have squashed valuable deals for lesser known creators. (which yes, it angers me, but NO, I’m not going to name them or take it personally because it’s none of my business. ) It’s just how things are.

#4 MIND YOUR OWN BUSINESS: I know creators who are so embroiled about worrying what someone else is doing or saying that they don’t get anything done themselves. I’ll be having a chat with a friend and ask them what they are up to or have accomplished lately and the conversation always steers to “Have you heard what so and so said or is doing” — Focus on YOUR business. Sure, it’s fine to keep up on what’s going on in your industry, but there’s a fine line between being informed and taking things personally or getting on your soapbox. People will just think you’re an idiot. When you find yourself feeling annoyed by some blog or newspost, STOP IT. Go worry about yourself. What have you drawn today? What positive connections have you made?

#5 STAY POSITIVE + BRIDGES: Things will go bad. At some point you may fall down. Something is not going to go as planned. Life is gonna get in the way. You may even have to eat some crow (I know I have!) In business you have to keep moving forward and stay as positive as possible. Not only will having a cynical, jaded, negative mindset about business cause you more bad business, but it’s also negative on your physical health! Sure there will be times you get emotional, angry, sad…. but when things get bad, don’t burn it all to the ground. Look for the silver linings or lessons you may need to take with you to the next thing. If you’ve burned bridges and regret it, you can always rebuild them with honesty and trust again. Sometimes those bridges may be shaky at first, but sometimes they are rebuilt even stronger than before.

#6 ETHICS & EGOS: You don’t have to abandon your morals or ethics at the door of the entertainment business. Many people do. Sure, there are a lot of egos out there and a lot of bad ethics. You have to realize not everybody is going to agree with the way you think and just move on and work with and attract similar minds. You don’t have to check your ego at the door either, but you’d be wise to at least make your ego or public persona likeable and helpful to others. Don’t make everything all about you and your opinions. It’s a good thing to stop yourself now and then and ask what are you offering to help others that isn’t benefiting you?