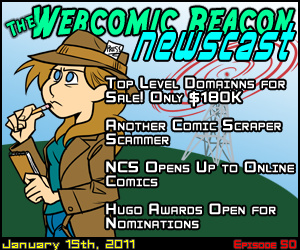 John Lotshaw (Accidental Centaurs) joins us for a special interview and guest his week! Please join Thom Revor with Alex Heberling and News Researcher Eric Kimball. Below are the bits of news gathered over the past week, as are mostly covered and discussed on the show. Some in more depth than other and some missed.

Editorial: Eric has another special editorial “Jayne’s Guide to Webcomics”. This is a part 1 of 3. (Part 2 coming soon)
Break Promo: The FuMP

Chris Onstead Interview
Talks about burn out and the troll nature of the net
Original Source: Comics Alliance

Thought about Fair use
Found via: Kleefeld on Comics – Original Source: Seth Godin

Spider Forest Accepting Submissions
The SpiderForest webcomic collective is accepting applications for new members until January 24th. Each application is read and voted upon by the entire collective, and answers will be out at the beginning of February. SpiderForest is both a collective and a free host, and readily welcomes anyone who meets our minimal requirements to apply.

Girl Wonder is looking for Board of Director members
Found via: Kleefeld on Comics – Original Source: Girl Wonder

Disney to make Into the Woods?
Into the Woods is a dark play that spends most of its time deconstructing Disney.  This is a kind of “what the hell?” announcement.
Original Source: The Mary Sue

The Webcast Beacon Network’s Melissa Kaercher in The Hobbit Trailer: The Unexpected Swede

Webcomic Blind Date
Are you a Writer or Artist? Get randomly paired up to make a Valentines Day comic! Sign-up by January 27th!