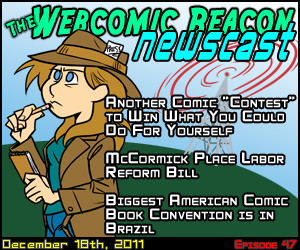 T Campbell rejoins the discussion with Thom Revor with Alex Heberling and News Researcher Eric Kimball. Below are the bits of news gathered over the past week, as are mostly covered and discussed on the show. Some in more depth than other and some missed.

Another “up and comic” webcomic contest. You win what you could do yourself!
The Cartoonist Studio offers a contest with an arguably a bad deal.  And then Kurtz does his standard charging off of the high ground into the swamp.
Source: Fleen

Cartoonists talk about sex (or lack there of)
Found via: Comics Beat – Original Source: Nerve

Women Like Sci-Fi and fantasy
Original Source: The Mary Sue

Why content needs to be everywhere
Original Source: GiGaOM

Asking “please” does not stop people from copying your work
Original Source: GoGaOM
And yet it was a profitable success – Louis C.K.

Superheroines check for breast cancer
Lets face it there is a lot to check.
Original Source: Bleeding Cool

Predicting the death of Newspapers
Original Source: The Daily Cartoonist