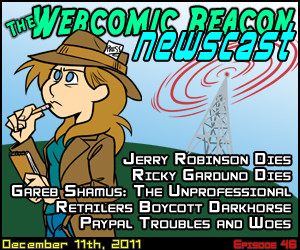 Deaths and drama fills the news from the last week. Please join Thom Revor with Alex Heberling and News Researcher Eric Kimball. Below are the bits of news gathered over the past week, as are mostly covered and discussed on the show. Some in more depth than other and some missed. Eric also has a special editorial on the paradigm shift of comic books in the digital age.

Somewhat related to the Gorilla formula of comics. (Wikipedia)

Only true Non-profits may use the Paypal Donate Button
Found via: Randy Milhouland – Original Source: The Consumerist

Being a Sociopath helps you in the startup world
Original Source: GiGaOM

Painting in Photoshop – by DragonOlong

Is HoboLobo.net Infinite canvas?
So here is a question. Is something like this fun or annoying? Does the parallax add to the story or just prove a distraction. Is this a valid excuse for side scrolling or shoud the maker be thrown into the pit ontop of the broken body of other side scroller web designer?
Found via: Fleen –  Original Source: Hobo Lobo of Hamelin

When is time to redesign your site
Original Source: Smashing Magazine

Read the entire editorial at WebcomicZ >

Jhonen vasquez did Invader Zim (which has a very popular cult following)! His comic JTHM was what got him picked up for an animated show, which is weird b/c it is not a kids comic. But im very curious to see this Cyanide comic come to life ^__^

Anyways, thanks for post the non-equivilance comic. This was a real problem we were having at the game studio i work at (designing male characters for a ladies game) and i think women have to struggle to make guys understand that we dont all like the mega buff guys. Anyways, my art director got a kick out of it.
Good show guys!

I, for one, actually really hate the overly buff males in games. It’s freaky and gross to me. I tend to play as female characters in most games (partly for that reason). Unless a game has a really robust character customization mechanic. Then I’ll spend more time trying to replicate all of my webcomic characters with it 😛