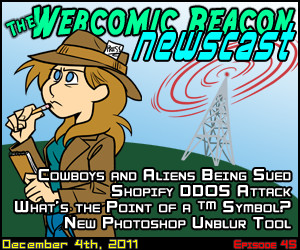 Sean Kleefeld (Kleefeld on Comics and MTV Geek) joins us as this week’s special guest! Please also welcome our new Show Director and Host Thom Revor is also joined by Co-Host Alex Heberling and Co-Host and News Researcher Eric Kimball. Apologies for the audio quality on this episode. We are working to solve the issue.

Jeff Jacques talks about his creative process and butts

“I am generally happy with my work, but I’m also my own worst critic (and I have some pretty mean critics). And I do have depression and anxiety problems, so there’s that. But I do like my comic, I wouldn’t be able to do it if I didn’t like it…”

Kate Beaton is a girl that makes webcomics!
Yes, we all love Kate Beaton. How many 15 minutes of fame has she amassed now? (-Fes)
Original Source: Uptown

Shopify goes down on Cyber Monday
Shopify the eCommerce platform used by some of the the top tier webcomics crashed Monday November 28th due to a Distributed Denial of Service (DDOS) attack
Original Source: Shopify – Additional Source on Facebook

In the forms CEO of Shopify talks about the difficulty of creating 100% uptime.
Original Source: Shopify

Saint’s Row – By offending everyone it’s politically correct.
Not really a webcomic related thing but the concept of being universally insulting could apply to comics like Oglaf and Cyanide and Happiness
Original Source: IGN

Call of Cthulhu (as though by Dr. Seuss )
Found via: Hal Hefner and io9 – Original Source: DrFaustusauAU

Do not be confused! We love Kate Beaton! It’s just a running gag of how many times she’s getting “discovered”, with articles that… pretty much say the same thing. We are moreso ribbing the articles themselves, not Kate.

It’s great publicity for her, no doubt! But it would be nice to see some actually new content. Then again, these articles are not for us, really. For fellow webcartoonists, its kinda like “grass is green, sky is blue”.