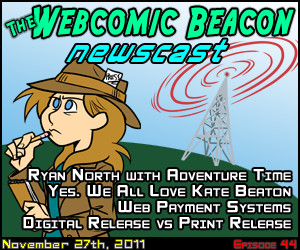 Rosscott says goodbye, as he steps down from hosting the show. Please welcome Thom Revor as he takes over hosting duties along side with Alex Heberling and our news gatherer Eric Kimball! Not all news posted here may have been on the show.

The Brick Testament banned from Sam’s Club for being too racy
Found via: Slash Dot – Original Source: cNet

Interview with Emma Caulfield and Camilla Rantsen
Not much really interesting from a technical standpoint but you do get to look at pretty girls talk about comics.
Original Source: Comic Book Resources

Achewood Returns from Hiatus… Again (is this news?)
Fine.  We did a story about this non-story.  Everybody happy now.  My god! A webcomic goes on hiatus and then returns.  Not like this doesn’t happen ALL THE TIME in webcomics. But NOOO this is news because Achewood was popular among a certain group of coffee shop hipsters once.  Lets just forget this is about the 4th time Achewood has “come back”, or the paywall or the general slide into mediocrity and loss of readership the comic experienced before the hiatus.  You know it’s not really a hiatus if everyone stops reading the comic first.

And you know what we can do next after talking about Chris Onstad’s Achewood .  Lets talk about Kate Beaton, who makes Hark a Vagrant .  Because you know what’s better than driving a story into the ground for a month.  Driving a story into the ground for over two years.  Let look at the hot interview with Kate Beaton by the cbc that ask the exact same question as every other Kate Beaton interview for the last two years.

Here’s and interview from CBC. Not enough?  Here is the exact same bloody story done by CTV News. And here is the same story again on The Economist. And another from Phoenix NewTimes. But wait here’s a different story.  It’s about Kate Beaton singing in a bar, from Comics Beat. Amazing. Kate Beaton goes to bars. It’s almost like she’s a normal human.  This is truly groundbreaking.

And really I could just go on with this let me give you this formula:

We’ve only been talking about her for months on end and yet saying nothing.  It’s not like the story has gotten really old. No Kate Beaton is vital news because…  I have no fucking clue why… but talking about her is the only thing that news should do.  We should just rehash over an over again this story about Kate Beaton who is this thing called a girl making this thing call a webcomic. It’s a girl making a webcomic isn’t that so notable and interesting.

I try really hard to collect interesting news about webcomic and Internet issues each week.  But to do that I am forced to wade through this unending ocean of empty Kate Beaton stories.  It’s like being drowned in cotton-candy.

I seriously hate the media. There are thousands of real quality webcomics out there doing innovative things and all they can do is focus on 3 or so over an over again.  You know who Kate Beaton(hark a vagrant), Chris Onstad (Achewood),et al are… R. Crumb.  Except for the insanity and borderline sociopathic behavior they are R Crumb.  A single individuals that the media latches on to represent a broader movement that they can’t be bothered to figure out.  Every time one of these Webcomic avatars sneezes it’s a story. But if someone else discovered the meaning of the universe in a webcomic? Well sorry, we can take the time to cover that we are too busy analyzing this famous person’s snot.

I swear to god if I see one more “{Person we have covered 1000 time in the past} draws with pencils and pens and then does this thing called scanning to put it into his/her computer” story I am going track these nimrods down and strap them to a chair and force them to repeatedly read their own articles clockwork orange style.

I suppose it could be worse.  The media could have locked on to some of the more unpleasant personalities we have knocking about the webcomic stew.  At lest the world at large gets the impression that we are intelligent attractive people who are relatively modest and unassuming. That’s probably not an ACCURATE impression I won’t tell them if you don’t

But what ever.  Here’s is your story about Achewood returning.  And if you miss it this time don’t worry you get to see the story again in a year or so when the Achewood repeat its hiatus cycle.  Because it will be all over the place again when that happens as “hot news”.  Seriously is this going on hiatus or just a very slow update schedule.  I can’t tell.

Pay a blogger day brought to you by Flattr
Original Source: GiGaOM

Question: Does cyber Monday mean anything to webcomics?
Reference: Wikipedia

XIII goes digital a year ahead?
Very few details on what this means.  Google search turned up nothing
Original Source: Bleeding Cool

XKCD shows us where ALL the money goes
Original Source: XKCD

The history of English in 10 minutes
Found via: Ryan North – Original Source: FactSpy

Convert Raster to Vector – by poiko

Canine VS Feline Chests – by daesiy

Step by Step painting – by bklh362

Wow, seriously, the person who wrote about Achewood’s return…bitter much?

First, it’s good to see a comic return, no matter how many times they’ve come and gone. It just shows they’re popular enough to do that.

Second, if the news is covering anyone in comics, isn’t that good? Don’t we want them to draw attention to our craft in some way, even if it is the same few comics over and over? That’s how the news is with everything honestly.

If you want to see more comics covered in the news that have been innovative and awesome, submit what they’re notable for to as many places as you can. And their fans need to as well. That’s the only way a new one will get picked up. Otherwise you’re just whining.

I have nothing against Beaton or Octopus Pie. But the over saturation of the non-stories about them makes my job very difficult and that is the place this rant came from.

I think you are missing the point. The argument (as I understand) is that a comic coming back from hiatus… yet again… isn’t really news. The commentary is more on the news, than the fact that a comic is coming back.

The same goes for Kate Beaton. I mean, It’s totally awesome she is getting so much exposure… the PROBLEM is that all of these articles are pretty much the same thing. Plus, she is already well known in the webcomics community, that none of these articles produce any new information.

Again, its more of commentary of the new articles themselves, not the content.

If I ever get Kate Beaton on The Webcomic Beacon, I will strike not to have an episode that sounds like one of several existing news posts/interviews.