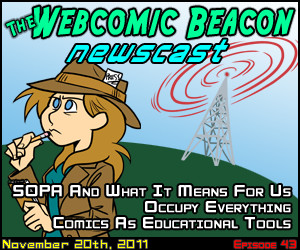 A large discussion on SOPA and what it really is, and how it may be interpreted. We do get a tad politically heated, but there is plenty of concern about digital distribution and what affects webcomics. Thom Revor (910CMX) joins Rosscott and Alex Heberling for this edition of The Newscast. Some news bits not mentioned on the show. Thanks to Eric Kimball for gathering our news links.

Controversy over the “Stop online Piracy act”
H.R. 3261: Stop Online Piracy Act (SOPA) is a bill that gives content producers and the government in general the right to block entire websites for engaging in piracy of content.  This bill is specifically aimed at sites like thepiratebay.org that are located in countries where American copyright laws do no hold sway.  However the bill is written in a way that could threaten every website that hosts user created content, at least for any site not based in the USA.
Found via: All over the Internet – Original Source: AmericanCensorship.org – Cyber Crimes Unit – GovTrackUS

So… Frank Miller said some things…
Frank Miller goes on an anti-Occupy Wall Street rant on his site. Many people are unhappy about it.
Original Source: Bleeding Cool

But not to worry Miller, Millar is here to defend you.
Not really.  He just decries the cybermob mentality.
DISCUSSION POINT: Is it okay to like the work but not the author? Do you have to believe in someone’s political or other beliefs to like their work?
Original Source: Bleeding Cool

And there is an Occupy Kickstarter
Found via: Bleeding Cool – Original Source: Kickstarter

On a non-collapse of the free world topic there is a Womanthology Preview
Found via: Bleeding Cool – Original Source: Womanthology

Jeff Kinney talks about finding a path to success through failure.
Found via: The Daily Cartoonist – Original Source: Richmond Times-Dispatch

One last attempt by Platinum to stay in business
Original Source: Variety

Short article on how to make a webcomic
Found via: Fleen – Original Source: Irregular Webcomic

Comixology hero or saint?
Pros of Comixology from the CEO of Comixology.  There is a bit of a stawman debate in this article but it still is worth a read.
Original Source: Comic Hero News

Wizard World CEO Can’t run from White Lando
Addressing question about all the people who paid for Wizard Magazine and then were left in the lurch when it went digital.
Original Source: Bleeding Cool

Vattu
Set in the universe of “Rice Boy”, Evan tells an epic story with a focus on art over dialog and using quite moments to convey strong emotional context.  The “rice boy” universe is a weird one and you do have to go into this comic with a heavy suspension of disbelief.  But the wackiness of the world is made up for by the strength of the characters and the attention to detail

So… Many… Memes
Found via: The Mary Sue – Original Source: blastr