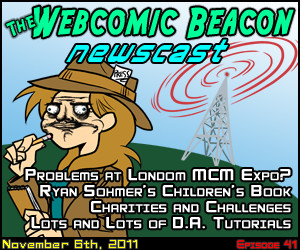 Fes Works joins Alex Heberling for this late edition of The Newscast. Thanks to Eric Kimball for gathering our news links.

An Evening with Waren Elis
Part 5 is the webcomic related one:

On Burst Culture: “You can read Freakangels on pretty much anything that can get to the web. And for me that trumps apps and specialized readers … and the rest of it.”
Another quote on Burst Culture, “I think people come to the Internet for short bursts of things.”

Ryan Sohmers create a children’s book
Man most famous for Least I Could Do the webcomic that raises misogyny to a high art form  is writing a children’s picture book.  The book unconnected to his comic out-site of resources from LICD were used in its production.  Interesting concept particularly how it addresses typecasting in the online communities.
Found via: Fleen – Original Source: Least I Could Do

Why we like to be scared in webcomic form (2 pages)
Found via: io9 – Original Source: Lucy Knisley

Another Article on the Death of Publishers.
Original Source: GiGaOM

Comic Conventions are a good place for women to pick up men
Less intuitive is that Asian Men are the most popular among comic con going women.
Found via: Comics Beat – Original Source: Slate

Email Alias system
It creates a temporary forward for signing up for sites that require an email address.  The forward expires preventing spam from reaching you.
Found via: Agent X twitter – Original Source: Tempalias

Oh man guys, asking if Warren Ellis has done print stuff is such a faux pas 😛 Transmetropolitan, Hellblazer, The Authority, Red ( as in Red that the Bruce Willis movie from last year was based on), and Nextwave, just to name a few.

That’s my bad, sorry. The only comics I read before webcomics were newspaper strips, so I’m veeeeeery out of the loop on the print comics industry and who’s who sometimes.

I didn’t ask IF he did print stuff. I said I didn’t know what else that he did off hand.

Apple made a decision to not check anything for copyright infringement because once they take on that burden they can be held liable for not performing their duties anytime infringing content goes through. From a legal standpoint it’s much safer to not screen app submissions for infringement and just let the infringed parties file a C&D once it goes live.