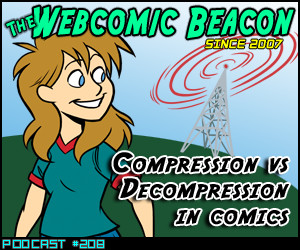 “sdshamshel” (aka Carl) from Ogiue Maniax joins Fes Works and Mark Savary in this week’s discussion. A large amount of this show comes from Carl’s post “Explaining Decompression in Comics” from his website, which we had reported on The Webcomic Beacon Newscast back in September.

Music: A Song Compressed by Country Church vs The Crotch Rockets

Family Bones is available at familybones.kingtractorpress.com

[…] I was a guest on the Webcomic Beacon, a podcast dedicated to (you guess it) podcasts. As a follow-up to my post Explaining Decompression in Comics, we discuss the concepts of compression and decompression in comics, what they mean and how they’re used, and how you could potentially use it in your own work. Have a listen and leave a comment, either here or there. […]

“compression” and “decompression”, in my opinion, is a term to describe very poorly written and/or drawn story.

Meaning….if the reader “notice” the pacing over being lost in the story, then that mean it was messed up. Imagine a film…an action film, take Aliens (#2) for example, it has fast and slow moment; but, we never noticed because we… I…I got lost in the story.

Take Manga… in Japanese culture, there is a sense of zen and aesthetic -along- with functionality. in my opinion, base on the stories I read, there is no sense of “compression” nor “decompression” because manga (the ones I read, can’t testify about the mangas I did not read) the pacing fit…the flow fit. It felt right, nothing was hurried…

Look at a Kurasawa film, there are moments of “lingering” on a feeling, a sense or aestetic of the moment. The same could be said about a Clint Eastwood western from Italy, there are moments where the director want the reader/audience to linger on an emotion or sense.

I think many American comic books are inferior in this aspect….and NO, I’m -not- a manga fan boy (which I am, TODAY)…I GREW UP LOVING XMEN and NEW MUTANTS.

I think, in my opinion, the writers/artist are given to understand that a full story can be 120-200 pages in their collected volumes. There are chapters, of course; but, it’s not like American comics where it feels forced.

Correction: Japan has no natural resources… that was one reason (minor or major?) Japan was highly interested in occupying China. The “telephone” book anthology are printed on the lowest fiber news print of mis matching colour any web press will print. These are disposable entertainment. Only the final volume are printed on higher quality news print.

Take webcomic….. “no discipline” if you want to think of it “negatively”. If you want to view it POSITIVELY; then, it’s “no time, nor resource, no page” limitation issue. Webcomickers are NEVER limited by page resource as in print comic’s 18 to 22 pages. Webcomickers are NEVER limited by any resource limitation like the JP authors with their 180 pages.

“no discipline”? Maybe? “No restriction on the author (writer and/or artist)to…… to: TELL A STORY his or her own way.

Let’s go to extreme…. American day time SOAP opera…. and Heros (That horrible TV show with a GREAT first season), it’s paced where you can miss many episode, when you return to it, a friend can spend a few minute and give a summary. While the plots may seem complicated, those stories aren’t. They just try to shove several concurrent stories down your throat so it come across as ‘complex’ story.

There is a book you guys (manga fans) should read. It’s a…shame many people don’t read it…

I met Frederik L. Schodt at AnimeCon 91, great and well read guy. His book help explain JP comic (so did Scott McCloud in his Understanding Comic). Manga want to follow a cinematic flow.

I think people should “watch” a manga like a movie.

BTW, another point of annoyance with American comic books…. intertwining of separate stories.

If Prof X were to appear in an Avenger issue, 3 issues from now, writers has to artificially massage the 22 pages so that Prof X/Avenger meeting will take place.

Hey, Marvel/DC, Here’s a new idea: TELL A GOOD STORY and NOT get artificially chained to artificial and abrupt and nonsensical pacing that break reader out of the story…. making the reader “aware” of pacing issues call “compression” and “decompression”.

Take a clue from James Bond… younger, as a kid, I didn’t GET IT…. Why does James Bond not look like James Bond.

Today…. I get it. It’s an action story that “take place today”. Take it for what it is: an action film set in today’s society.

Manga (so far, I’m lucky to NOT have come across any manga with bad pacing issue)….. is, in my opinion, have a better quality in story telling.

BTW, read Understanding Comic if you don’t want to get Manga Manga book by Frederik L. Schodt. McCloud does a great job in breaking down why Manga’s pacing is different from American’s “action to action” dominated panel transitions (as in Kirby’s fight scenes); manga employ more “aspect to aspect” panel transition where the author allow…want the reader to linger on aspects of a scene in order to convey a mood.

Splash pages? I’m still out on that one, no opinion on if it’s great or lazy. If used too much, it looses it’s effectiveness. Okay….I think it’s laziness in 22 page setting of print books. Splash pages in webcomics, as long as it is a double post (Splash + story page or story page + splash) can work…..

……..yes, it will give the reader that they “got their money worth” having a double post in webcomics.

For the record, I stopped reading hero-type comic because it’s, IN MY OPINION, stories are analog for Pre-Pubescent Male Power Fantasies…… “guys in tights hitting each other”

I’m not saying “manga is never about this”….look at Dragon Ball, famous example of homage to Journey to the West and Superman/hero comic stories.

P.S. I love your cast. I am trying to suck out everyone’s knowledge and experience before I launch my webcomic. I will launch it after I get a Cintiq….within the next 3mo.

One last thing…. great example of very bad pacing (along with other matters):