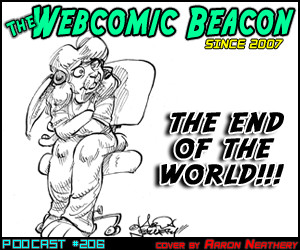 Karen “Kez” Howard (War of Winds and What It Takes) returns, along with Aaron Neathery (Endtown) to The Webcomic Beacon and join Fes Works, Tanya Higgins, and Mark Savary this week! Kez was last on during the Penguicon 2011 panel (of which you can watch it all on video!) No zombies on today’s show. We did zombies last year with Jenny Romanchuck.

Also, The Tropecast has returned with two new episodes, including one on horror tropes! Plus Webcast Beacon Network new video series called First Issue; a comic book review show, starting with DC Comics’ new 52! Also, check out how to enter the 4th Anniversary Special Giveaway, such as sending in Becky Art or a voicemail at 1+320-310-0922!

Music: End of the World by Great Big Sea (Cover of R.E.M.’s song)

Notes: Atop The Fourth Wall, Romantically Apocalyptic, Not a Villain, Apple Valley (mentioned as Apple of Dischord), Harold Camping, A Brief Guide to the End of the World for Heathens, Theater Hopper, Bittersweet Candy Bowl, Zombie Ranch, Demon Graphics,