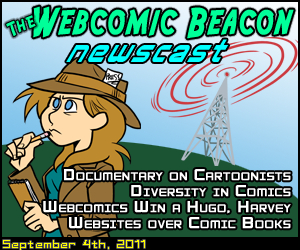 Dante Shepherd, of Surviving The World, joins Rosscott and Alex Heberling to look over and comment on the comic and webcomic news of the week! Thanks to Eric Kimball for gathering our news links.

New Documentary About Cartoonists
Dave Kellett and Fred Schoeder have been going around interview cartoonist both web and traditional about their work.  They are now working to pull these interviews together into a documentary.
Original Source: Kickstarter – Additional Discussion: Fleen

Article on the Invention of Spiderman From 1977
Original Source: Jack Kirby Musem – via: Bleeding Cool

Children Show a Preference for Websites Over Comic Books
Original Source: The Gaurdian – via: Bleeding Cool

Kris Straub Starts a Podcast Analyzing What it’s Like to Try and be Funny
Original Source: Human Authority – via: Kris Straub’s Twitter

Dern’s Scurvy Dogs Kickstarter Makes it to their Goal
Webcomic creator who is using lots of other webcomic artists to make a board game is fully funded on Kickstarter.
Original Source: Kickstarter – via: Dern’s Twitter

First, I would like to say the Newscast has hit its stride. The broadcasts are really well-done.
As to the Discussion about Diversity in Comics,
“And there are no secret land mines waiting for you if you exercise just as much care in building characters that look, think and behave nothing like you as you do characters that could pass for close relatives…”

Ha, speaking of human My Little Pony variants, “diversity” doesn’t just have to be racial. My friend Mayeko got crap from some folks over on tumblr for making her human Pinkie Pie chubby. Later she pointed out that despite the haters, Pinkie Pie was also got a landslide of compliments (and noted that despite being equally underweight as Pinkie was over, no one seemed to raise concern about Fluttershy’s figure)

I made my over versions of human ponies here: http://fesworks.com/llc/human-my-little-ponies (not very good). I also had a big post about why I made each character like they were.

In lue of using race with ponies in general (Ponies are ponies), you can always diversify with cultural backgrounds, etc. But also, the real key here, making sure that each character is not basically just the same as any other character, but just looking different. Some people forget even that bare minimal step.

Thanks Rossmom! I didn’t want The Newscast to become “The Webcomic Beacon 2”, which is why I wanted a host that wasn’t me. I knew Rosscott from our time as segment producers for Infendo Radio, and heard about his interest in podcasting…. so I snatched him up! MWAHAHAHAHA! It’s that self-motivation that is key as well. Plus I’ve gotten better about not talking on the show when I shouldn’t be on 😉