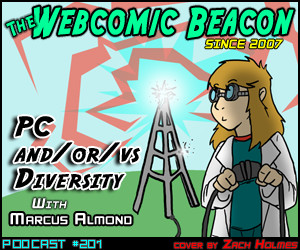 Marcus Almond (The Razor Kid) joins the crew to discuss the topic of diversity in comics. The primer for this was the new (non-white) Spider-Man of the Ultimate Universe. Are we adding diversity for the sake of adding diversity? Are we actually trying, or just taking the lazy route?  Fes Works, Tanya Higgins, and Mark Savary are here for this episode. Cover by Zach Holmes.

Whenever someone goes on about no black people on the show friends I have to post this.

Oh for the love of god! FURIES ARE’T REAL! You can be bigoted against fictional races. Should we protest 30 rock for the lack of Cyborgs in the main cast? Are we upset that the nightly news doesn’t have any vampire anchors? Are there not enough night elves working in the comic book industry for you?

Fictional races are made to be archetypal. That’s the point of them. You make a polarized version of humanity to explore issues of cultured clash and get outside view on our own culture. You don’t complain that Star Trek was bigoted against Klingons because it portrayed them as all warriors and never had any hippy Klingons. They are Klingons! They are a made up race of warrior people. The whole point of alien and furry races is that they are arch-typical.

And yet, there are people that are adamantly against furries (characters), as if it’s morally wrong, etc. You are messing with semantics when you call them “bigoted” yes, but it still can be a prejudice (pre-judgement), as well just being a douche.

You can also look at it from a parallel within the comic, in that context, of other characters hating other types/races of characters within that universe.

Also, I strongly disagree with saying that fictional characters are made to be archetypal. Because stories that do that, make them bland, typical characters, which doesn’t help the story be as fun/good as it could be.

NOTE: I am no way drawing parallels between fictional characters and real people, as far as real prejudice and bigotry goes. Just to make that clear. The discussion was more or less brought up as an example in dealing with diversity from a different angle.

I’m not saying fictional character are made to arch-typical but fictional races are. Take your standard sci fi show with a cast of alien races. Each race has a defining characteristic something we see in human or animals takes to extreme. Such and such race is spritual or warrior or doglike or so on.

Now a well written show will move the main characters beyond their polarizing types but those archtypes are aways part of the make up of the character. Spock can learn the meaning of love but he still will be a cold logical Vulcan most of the time. Its the interplay or racial charaterisics and the free will of the character that makes the intersting story. Neither complete rejection of one archtype nor complete embracing it is interesting its the interplay between the two.

For example you could have a fox character that is sly and clever most of the time until that one moment when something goes really wrong when something he really cares about is on the line and then he explodes in to an unexpected unthinking barbarity. Because of his archtype and the fact that he embraces it most of the time makes this moment even more interesting.

As for people hating furries. It’s the internet there is always someone hating something. There should be a rule 33; if it exists there is someone out there that hates you for liking it. It probably isn’t even predudice since many of these troll hate everything or mostly everything. The treat every medium equally trying to destroy all joy in the world so that everyone will think exactly like them. Still not bigoted just douchie.

I HATE the “sly fox”. It is so goddess-damned stereotypical, and LAZY. I would argue that it is pigeon-holing characters, solely based on how they look, etc. I have problems with simple archtypes that don’t expand beyond the base. Gross oversimplification.

So I think we… mostly agree?