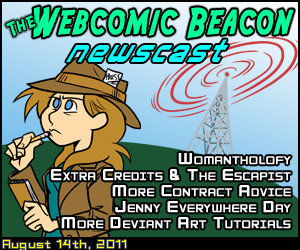 Stef (Sarah Zero) joins Rosscott and Alex Heberling to look over and comment on the comic and webcomic news of the week! Thanks to Eric Kimball for gathering our news links.

Marvel releases their back issues on Comixology
Not really the event that the article promotes it as.  Marvel is putting comics from there unlimited 4.99 per month service as ala cart sales on Comixology.  So you can not pay 2.99 to buy one comic instead of paying 4.99 for all of them  And these are still back issues.
Original Source: Bleeding Cool

Another Case of Apple Censorship
This is an odd one since the app went through for the iPad but was blocked for the iPhone.  It reveals a certain arbitrary nature to Apples screening process.  In the end you are at the mercy of a single individual who can block content for any reason they see fit.
Original Source: Comics Beat – via: Bleeding Cool

Jim Davis Release a Comic Making Software for Children
The tone of the article is tongue in cheek with Jim Davis saying he’s releasing a software so powerful it will supercharge the imagination and may put him out of business (he was joking).  Clearly a marketing ploy but that being said, it does look like a good platform to introduce kids to the world of making comics.
Original Source: Comics Beat

Self-Publishing: Threat or Menace?
Argument over the value of self publishing from Adrian Zackheim president at Penguin Books.  Basically authors are better served going through a publisher because of all the services they can provide.

PS: Penguin Books is not accepting submission from first time authors. It will only accept work from established authors. How do you become established?  Zackheim offers this advice:

My advice to aspiring writers is to pursue the traditional path of agents and publishers to the best of your ability. If you fail to get traction that way, you can certainly try self-publishing as a way to attract attention and build your platform.

So basically Zackheim’s advice is if you are an established author with a big following who could sell things themselves and make a lot of money doing so FOR THE LOVE OF GOD DON’T SELF PUBLISH SIGN A BINDING CONTRACT WITH A PUBLISHER!

The reference link has a pretty good rebuttal of the point in the article.
Original Source: The Portfolio Javelin – via: Kleefeld on Comics
Additionally: NY Time Article the promoted the discussion.

How the Net is Changing Storytelling
More about traditional media than webcomic but show how stories are not being integrated with websites and online participation to make a richer experience.
Original Source: Guardian – via Comics Beat

Bad Blood on The Escapist Magazine?
Extra Credits reports not being paid, among other things, forcing them to stop producing their popular analytical series on the gaming industry. Check out The Examiner’s link for a comprehensive compilation of the events.
Original Sources: Extra Credits’ Twitter, The Escapist’s Facebook, The Examiner

In Summation Womonthology raises 109K
See below as to why this is important.
Original Source: Comics Bear

Should the contributors to Womanthology be paid?
The run away success of womanthology has prompted some grumbling from prominent webcomicers over the fact that none of the contributors are going to see a dime of this money.  Theyt don’t even get a free copy of the book.

Merdeth Gran of Octopus Pie made some oblique statements about the best way to promote women is to pay them.
Original Source: Google+ via: Comics Beat

And more thoughts on the matter here: Laurenn McCubbin

[Eric] Putting in my personal opinion here Womanthology seems to be operating under a “Gospel of Wealth” premise where the orginizers are putting them selves forward as the best entities to use this money to promote woman in comics.  If they paid the contributors the money would be spent on personal needs but by pooling the money in one set of hands it can be used to create more oportunities.
More on Gospel of Wealth.

What Fes Heard:
To recap some commentary, The Womanthology started as a vollunteer effort for exposure, pure and simple. No one expected that they would make over over 4 times the goal. I believe that any extra money was already meant to go to Chairty (or something?). Otherwise all of the Kickstarter ($25,000) was to go to printing the work.

It was also stated that all contributers would indeed be getting comped books.

PLUS, I think the ADDITIONAL discussion here is: “What should happen with Kickstarter funds that go well over the stated goal?”

Obviously, the Kickstarter incentives, the things people select to back a project, get top priority after the main focus is taken care of. I Know Poorcraft’s extra money went back into the production of the book, as well as (i believe) pay Diana (the artist) a bit more… especially since the book is turning out to be longer than previously expected.

<We covered this last week>

Scott Kurtz got a deal with Wizards of the Coast. It happened a little while back but there’s a CA article on it. Possible tie-in to last weeks’ quesiton, what will become of webcomic properties in 20 years.
Source: Comics Alliance

But again given the current environment it is questionable if this will open many door.  DC comics has come out pretty strongly against hiring women creators skilled or not.
Source: DC Women Kicking Ass

Responce to Scott McCloud’s Understanding Comics
In short people suck and not everyone should be allowed to communicate and not every idea should be expressed.  Cartoonist should not focus on reaching the most people but advance comics as a art form creading deeper and more meaningful work.
Original Source: Ben Towle – via Kleefeld on Comics

Marvel Bribes Retailers to Destroy DC Comics.
This… This is a weird one.  Marvel is offering comicbook retailers a special edition Batman if they tear off the cover of 10 flashpoint books and send them back to them.  They are asking the retalier to destroy DC book to get a special Marvel book.
Original Source: Comics Beat – via: Wired

Kia’s “Different Temperature” Ads
There has been a lot of controvery about this ad campaign (a campaign that never actually ran) ranging form complaints about sexualizing women to accusations that it promotes pedophilia.  However the Ad is also interesting from a purely technical standpoint of mixing two art styles on a page to represent vastly different viewpoints.
Original Source: A New Hype – via Google+

Ok I really feel like I need to sum up the news out of the major publishers for the last couple of weeks.

Hey guys, thanks so much for having me on the show! I’m listening to it and I did a lot better than I thought I did. Wow, I was soooooo nervous!

Re: Womanthology: It might be helpful for future Kickstarter campaigns to clearly-define how additional monies will be spent in the event that projects exceed their funding goals. People like certainty. If this was defined ahead of time, Womanthology might have been able to raise even MORE money.

Thanks again, I’d love to come back on the show sometime!

That Microsoft comic chat program Alex talks about is what is used to make the long running webcomic JerkCity.

THAT’S IT! Wow, it looks just as awful as I remember it.

If a kid is going to want to get into comics, he’s better off starting out w/his own ideas and drawings rather than a ‘cut & paste’ type of aide. That inhibits their imagination.

Kids have terrific imaginations. Why else give them paper, pencils and crayons and ask them to just draw pictures?

By giving them a framework, it takes away that creativity.