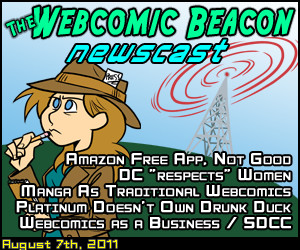 Rosscott and Alex Heberling return to the show, with Samantha Kyle this week! Thanks to Eric Kimball for gathering our news links.

Audio from SDCC, TCAF and More
Indie comic marketing is an interesting listen covering how to game the major news sources to get noticed.
Original Source: The Comic Books

Greg “Real Life Comics” Dean and His Wife Liz Had a Baby!
Not sure if this is big news, but he’s been doing a webcomic for forever and all.
Original Source: Real Life Comics

Peanuts Pushes into the Digital Landscape

There is a major push by the holding company Peanuts Worldwide to push the Peanuts into the digital realm.  This does bring up a question since the creator of Peanuts Charles M. Schulz is dead will social media be a benefit.  Social media is designed to get people in contact with creators and break down that wall. *Iconix Brand group, that own the rights, is the same group that shut down PeanuTwitter.

FOR DISCUSSION: Should properties go on long after the creator dies? Would you want yours to do so?

Seven Seas Sets up a Free Manga Webcomic Site
This is the first one that uses the “traditional webcomic model” of ad suppored, free comic.

Seven Seas formed the site in partnership with Pixie Trix Comix, a webcomics portal set up by webcomics creators Gisele Lagace and David Lumsdon (Magick Chicks) that also runs comics by several other creators.
…
What’s interesting about the new site is that it looks a lot like a bootleg manga site: The comics are simply displayed in the web browser, rather than embedded in a Flash-based reader, and they are surrounded by ads. If you changed the banner, it could be MangaFox. And Seven Seas has something else in common with the bootleg sites, something traditional publishers tend to neglect: They do forums well, with editor Adam Arnold frequently dropping in to make comments or respond to questions.

The Duck (aka Drunk Duck) is No Longer Owned by Platinum
But by Wowio Which was Spun Off of Platinum in 2009. Since Wowio is not a publicly traded company we do not know how much debt it is carrying.  How much was left with Platinum and how much it took on.
Original Source: Comics Worth Reading

In The Future, Everyone is Going to be a Struggling Webcartoonist
Article on how the corporate move to contract work and outsourcing will mirror what is happening in the webcomic world with the move away from major publisher to independents.
Original Source: Kleefeld on Comics

Article on Webcomics as a Business
A pretty introductory article with some good points featuring Mookie, R. Stevens, KC Green and others.
Original Source: Boston.com – via R Stevens’ Twitter

How to Succeed at SDCC
Original Source: Webcomic Marketing via Fleen

When to End a Webcomic?
Ratfist ends after 150 pages, Freak Angels after 144 chapters.  When is a good time to call it quits and when are you killing a comic before it came into it own?
Original Source: The Daily Cartoonist and Bleeding Cool

#comicmarket Implodes Under Racist Comments
Discussion about the new black spiderman caused a breakdown of the twitter discussion group #comicmarket when the creator made a number of racist jokes about the new character:
Original Source: Graphic Policy ref #1, ref #2 – via Women in Comics

Archie Comics Insanity Continues
In response to the “penis” accusation Silberkleit is saying that the the real problem is Goldwater’s chauvinistic views towards women and an attempt to force her out.
Original Source: Lohud.com – via Robot 6

William Shatner and Adam West
Apparently the pair were on a pilot together.  A shock that it was not picked up with such raw acting talent on the show.
Original Source: The Mary Sue

Peanuts Pushes into the Digital Landscape
How much more exposure does Peanuts really need? But the more important aspect pertains to continuing a comic after the artist has died.
This was in an article that included the following: “Charles Schulz, of Peanuts fame, requested that his strip not be continued by another cartoonist after his death. He also rejected the idea of hiring an inker or letterer, comparing it to a golfer hiring a man to make his putts. Schulz’s family has honored his wishes and refused numerous proposals by syndicators to continue Peanuts with a new author.”
I believe that sums it up. If the family approves it, go ahead. If not, just forget it and find a idea. If it’s good, you can garner all of the fame and fortune of Charles Shulz and not cash in on someone else’s hard work and effort.

I’m kinda fascinated by pageviews and how many people are reading what comics and what not. Mostly since I’ve had the ability to see how many views I’m getting.

My highest peak in readers on any day was 92 people, so I definitely don’t compare to any of ya’ll on the show, but it’s still kinda neat to think that, once upon a time, everyone was in my position, and have gotten more viewers over time.