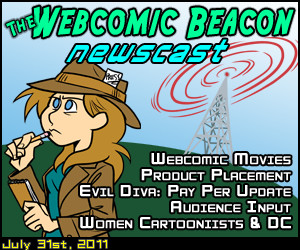 No Alex or Rosscott this well, but Thereisnosaurus (Hero in Training) joins Eric Kimball and Fes Works running this week’s episode.

LastBlood Director Announced
Under the topic of good things happening to bad people it looks like the Lastblood movie is actually going to be made.  Simon Hunter (The Mutant Chronicles) is going to be the director on this and the script was written by Bobby Crosby and Nick V. Hunter.   Both Bobby and Nick are first time writers with no experience writing movie scripts.

There is some debate over if this is the first webcomic to be made into a movie.  Cowboys and aliens seems like the first but the response to that criticism ComicM!x said this:

We didn’t count Cowboys And Aliens because the movie was optioned back in 1997, before a single page of the comic was ever drawn. It wasn’t webcomic to movie.

Is Cowboys and Aliens the first webcomic to movie?
Well MTV Geek has given us the history.  You decide.
Original Source: MTV Geek

Viz opens online manga store
Viz Media announced the launch of their online manga site, VIZManga.com, at their 25th anniversary party in San Diego last night. The site syncs with their iPad and iPhone apps, so users can buy the manga on one platform and read it on all three, and it is also compatible with Android devices.

Scott Kurtz to Experiment with Product Placement
PVP will now feature story-lines with product placement in it. An interesting idea. Scott says he is the first to this idea but  others have experimented with this ideas.  Eric Kimball and DJCoffman to name two; and in a sense anyone who has done a paid cameo has done a product placement.

But bravado aside the limiting factor has always been the time spend negotiating out weighs the profit gained from the placement.  Scott has not found a solution to this problem stating himself that the setup took an inordinate amount of time.

Evil Diva Goes Pay As You Go
Unable to pay for their their artist’s salary Evil Going to a pay as you go system. The are also looking for an advertising manager. 20% gross profit pay.

Texture and Color Theory – by Ostwyn

Cats vs Dogs – by Daesiy

[Tom Brevoort:] Writers don’t do stories specifically to piss off fans. Writers write stories about which they feel passionate and invested. As a reader, you’re entitled to one thing and one thing only: a reading experience in exchange for your purchase. And if you like that reading experience, the expectation is that you’ll come back for more. But the audience does not and should never be in control of the stories. Writers are writers because they know how to do what audiences don’t know how to do—tell stories that affect you and move you. It’s way tougher than it looks. Storytelling isn’t a democracy, you don’t get a decision in how the stories go. All you get is your one vote, with your dollars or your feet.

Trigger Warnings
What precaution should we take when dealing with subject that could “trigger” past traumas in people.

Would a Woman Cartoonists Even Work for DC if Asked?
An interesting question came up on Fleen.  If DC offered a job to one of the many woman webcomic creators would they even take the job?  The money is not good and the company has shown very little loyaty to their female creative staff.   They’ve turned their nose up at books centered on a female audience. And most of all when you work for DC you don’t own the work so there is no payoff for doing a good job.

Would any female creator even take the job?
The response seems to be yes, because a job is a job. Here are are a few quotes:

… Yes, I would consider it. Remember DC isn’t just about superheroes, there’s also the wonderful Vertigo comics offshoot, which shares parts of the DC universe, and has traditionally been a lot more accepting of alternative drawing styles, mature(in the sense of for adults, not x-rated) storylines, and is generally awesome. I’m not sure what I could do with Batman or Superman, but I’m the kind of artist who would try anything once

… I would totally accept the offer. I like to try new things. I understand I wouldn’t be making a lot of money, even if my hypothetical DC books were successful, but I would love the chance to work with a bunch of other artists….

given how retarded their management is, no. I already have one supremely frustrating chain of command. I don’t need another.

depended on the details of the project. Writing, yes. I’d have time for that.

oh, I’ll do good work for anyone who pays me so yeah

haha oh, no, definitely NO. Gary says it all, why work for something that you can’t ever own or really contribute to?

Had the wrong cover for this show. should be fixed now.