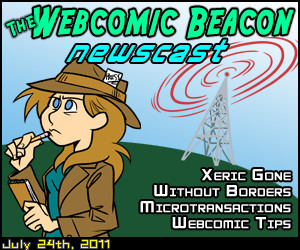 Just a short episode this week, as we are without Rosscott. Instead we have Alex Heberling, Michael Dellheim, and Fes Works running this week’s episode. Thanks to Eric Kimball, our newshound for collecting articles. Not all articles may have been gone over in detail, but they are all listed for you.

Tezuka Moves to a Digital Strategy
It was announced last Wednesday that the works of Osamu Tezuka — one of manga’s founding fathers and greatest masters — are now available in English as a digital archive accessible via an application for Apple’s iPad.

“I hope that we will consider the spirit of Osamu Tezuka as we transmit his works to new audiences using digital technology,” said Takayuki Matsutani, President of Tezuka Productions Co. Ltd., at the Toyko launch of the app. “I am aware of the troubles in the market, and hope that we can contribute to a recovery.”

Not Micropayment, Microtrasactions. A Lesson For the Videogame Industry
Original Source: Extra Credits

Android’s Legal Woes.
Microsoft has struck licensing deals with a handful of Android manufacturers including HTC, while Oracle is suing Google and may be looking for a big settlement from Google or its hardware partners. And Apple may not be looking for royalties at all from HTC, Motorola and others, but might be content to ban Android products or force costly workarounds.
Original Source: GiGaOM 1, GiGaOM 2

Does Social Media Get in the Way of Creativity?
The addiction to the endless interruption and engagement does make it hard to find the flow of creation. The endless ping of your phone makes it harder to live in the moment, to be present. Observing life is so much a part of the creative process for me that the constant distraction of social media has become problematic.
Original Source: GiGaOM

DC reboot: My uncle is planning on getting every single issue of every single new series. I looked at him funny. I think it’d be neat for you Fes to do a series of reviews from the perspective of someone who doesn’t read comic books! Yes, Fes, you need another project!