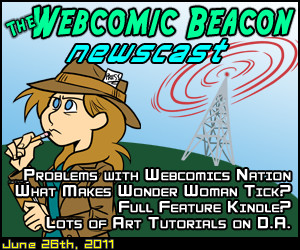 Lee Cherolis and Ed Cho (Little Guardians) join Rosscott and Alex Heberling for this episode of the Webcomic Beacon Newscast. Lots of corporate content this week. Thanks to Eric Kimball, our newshound for collecting articles. Not all articles may have been gone over in detail, but they are all listed for you.

Break Song: Before He Tweets by Steve Goodie

How Not to Write Wonder Woman
Original Source: Robot 6

Deviant Art Tutorials of the Week

“Is the Mobile Web Broken or Breaking?”

NY Post Forces You to Buy an App to View It on the iPad
Original Source: Poynter – via The Daily Cartoonist

Onswipe Tries to Lure Publishers Back to the Web
Original Source: GiGaOM

Open Letter to DC to Put There Backlog on the Web for Free
Original Source: Wired – via Robot 6

This article is worth it just for the picture at the top.
Claimed By:
I don’t care what’s it’s about the image made me giggle.
found via 8pt reference(s):
8pt URL goes here
Original Source:
http://allthingsd.com/20110622/whats-the-top-selling-phone-at-verizon-and-att/

[…] Tweet I'm excited to report both Ed and I were guests on the latest episode of the Webcast Beacon Newscast over the weekend, hosted by Ross Nover of the System along with Alex Heberling of Alex's Guide. The episode was released this morning so go check it out! […]

Analysis of a Failed Kickstarter: I think one of the most important things anyone can do when anything fails is to analyze why it failed.

If you just accept the failure and never understand what caused it, you won’t be able to improve it and thereby avoid the same mistakes.

“Success is not final, failure is not fatal: it is the courage to continue that counts.” -Winston Churchill

“Our greatest weakness lies in giving up. The most certain way to succeed is always to try just one more time.” -Thomas A. Edison